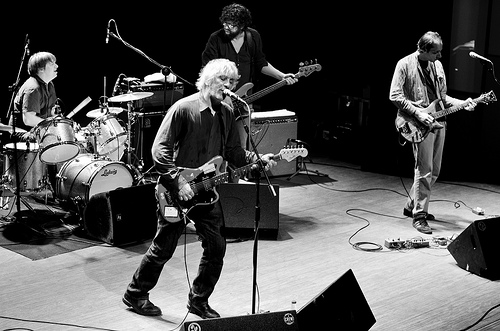 Lee Ranaldo and the Dust played the Biltmore Cabaret in Vancouver, BC on Dec.7. Here’s our interview with him where he discusses his new venture as a solo artist, after spending almost his entire career with Sonic Youth.

Northern Transmissions: Right now you’re in the middle of a tour that’s taken you to Europe, India, Eastern and Midwest US as you now embark on the Pacific Northwest, how are you feeling about the tour so far?

NT: You do have a connection with one of your recordings “Ambient Loop for Vancouver”, how did that come about?

LR: I don’t know why those were titled that to be honest. I have family connections here, my wife is Canadian and her brother lives here, they’re from Winnipeg originally. I think I made them for some record that was going to come out here, and maybe it didn’t, and it ended up on another label.

NT: So after the tour is done, what is the next step musically for you?

LR: The record just came out in the first week of October, so not that long ago, we’re going to do some East Coast dates in January, and then I’m going to Australia to do this other thing. We got shows planned through the spring and some festival stuff in Europe in May and June. I’m starting to think about new songs, I think we have a ways to go though with this record to play to people.

NT: How do you feel about being the main guy of a group here as opposed to your previous role?

LR: It’s definitely interesting to be fronting a band as opposed to being on a collaborative team, and being in a band now where I bring in all the songs, as opposed to being part of a four way writing situation. You know I’ve kind of just fallen into it at this point, it’s been pretty fun for the most part. Having to be put out there to create all the songs by myself has been an interesting challenge and process. I guess mainly because I feel that the songs are really good, that’s it’s all fallen into place. The weirdest thing was the first couple months when we were gigging out, and I realized that I had been in one band pretty much my entire life, and the idea of committing yourself to band for that long has really been something, it needs the right chemistry and all that stuff. So in the beginning, it was weird being the front person, being the guy singing all the songs, but that was only weird for a little while, we eventually got over it. I obviously have played with Steve (Shelley) for a really long time, and I have played with Alan (Licht) too in experimental projects. To gel as a band took a little while, we changed bass players, and by the time we toured for a year I felt we really came together as a band. When we started working on this new record, I was bringing these new songs to a band that I felt was really going to be ready to interpret these things. That’s one reason this record is credited to a band (The Dust), I’m still writing all these songs, but the arrangements are band made.

NT: How important for you was it to have Steve and Alan, guys you’ve played with before to be with you on this project?

LR: It was important that Steve was involved, we have a relationship that goes back a long way, and aside from working on Sonic Youth stuff, we’ve done some other projects together. He’s often been one of the first guys to hear any stuff I’m working on, so our relationship is pretty important, and I feel like he’s a real critical advisor to any stuff that’s going on. We’ve been through a lot together, so we share a real musical language. The same goes for Alan, but we’ve never played in rock bands previously, it was always experimental and improvised music, I knew he had been in rock bands before and was a really good player, so it was happy circumstance to have him involved too.

NT: You have a lot of other artistic endeavours that influence you, anything lately that’s been driving you?

LR: I trained as a visual artist, and the last couple of years, I’ve been doing a lot of drawing, lots of drawings of roads. It keeps my hand in on the drawing tip, the road is always moving. I spent some time this past summer at the Nova Scotia School of Art and Design, and I did a bunch of prints at their legendary shop. I do etchings on old vinyl records too, these 16-inch vinyls from the 50’s. I do exhibitions and installations when I can.

NT: Which five records are still influencing you today?

Joni Mitchell – Songs to a Seagull