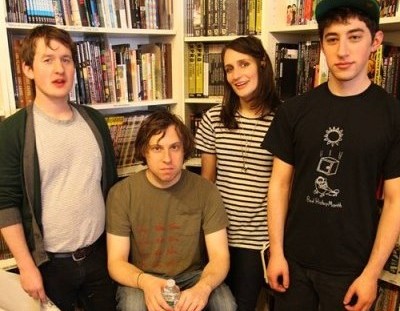 Northern Transmissions Chatted with Mike, Sadie, and Matt from ‘Speedy Ortiz’. We always love bands with a great sense of humour. Major Arcana by ‘Speedy Ortiz’ is now out on Car Park Records.

NT: I heard that you guys used to steal albums from your parents collection, which are some of the ones that still stick with you today?

Mike: I didn’t really ask to take all of my parents’ records, but I just figured they had no use for them. I’m keeping them safe and listening to them pretty frequently. They can have them back anytime they want. Stevie Wonder “Music Of My Mind” and “History: America’s Greatest Hits” are pretty dope.

NT: One of the first songs you released was titled “Taylor Swift”, what is the true inspiration of this song?

Mike: That was our first song. It’s mostly about Selena Gomez. Did you know she auditioned to be on Barney & Friends with Demi Lovato? We’ve been expecting more questions about the song “Cash Cab” by now, but we hardly get any. Video bonus is so tough. Why does anyone risk it? Just take the money.

NT: You worked with Paul Kolderie (pixies) and Justin Pizzoferrato (Dinosaur Jr) on the previous mentioned, how did you hook up with those guys?

Sadie: Paul heard my old band, Quilty, and offered us some free recording time, but we broke up a few days before the session. Scrambling to fill that space, I asked Mike to come play drums on a couple of songs I’d been working on for Speedy Ortiz, my then-solo project. I think Paul was a little confused about the change of band (especially since Quilty’s drummer came to the session and tracked demo bass on the songs), but thankfully he was pretty cool about it. Justin recorded Matt’s old band, Graph, which was how Speedy wound up working with him and becoming his friend.

NT: “Major Arcana” appears to be more of a group effort, was the writing process more of a collaborative effort then the previous EP?

Mike: Arrangement-wise, it was very collaborative. The song “Gary” evolved into the album version over the course of 6 or 7 months.

Sadie: Right. I wrote the songs on ‘Major Arcana’, but the structures were more malleable to group input than anything on ‘Sports EP.’ And in terms of production on the album, we made decisions wholly as a band.

NT: Was moving from Brooklyn to Northampton, Mass a difficult transition? Many artists do it in reverse.

Mike: I still live in Connecticut halfway between Brooklyn and Northampton, so the transition was very easy for me.

Sadie: If anything, the lack of late night Thai food in Northampton has bolstered my ability as an artist. Less time on drunken noodles = more time on songs.

NT: Matt is a classically trained guitarist, does it feel odd playing such a different style of music at times?

Matt: I didn’t want to be a concert guitarist at any point but wanted to take elements of those musics for my own artistic means. I studied classical guitar as technical academic work for my general musical aesthetic.  I’m still trying to find out what that means. Music is a journey y’know.

NT: Speedy Ortiz is a pretty catchy band name, where’s it from?

Mike: Sadie did a cassette of bedroom recordings called “The Death of Speedy Ortiz” which is named after an event in one issue of the Love & Rockets comics. When the band formed we decided to use 4 or 5 of those songs and keep the band name as Speedy Ortiz, because we couldn’t think of anything better.

Sadie: Speedy Ortiz is a character from ‘Love and Rockets.’ “The Death of Speedy Ortiz” is an issue of the comic in which, duh, he dies. I thought it would be funny to give a debut album that name, sort of to imply that the project was dead on arrival. Or like how ‘Return of the Rentals’ is the title of the Rentals’ first record.

NT: Which five albums are still influencing the band?

Mike: I think their debut album “5IVE” is their most influential, which included the smash hit and TRL favorite “When The Lights Go Out.” They kinda fell off the map shortly afterwards.