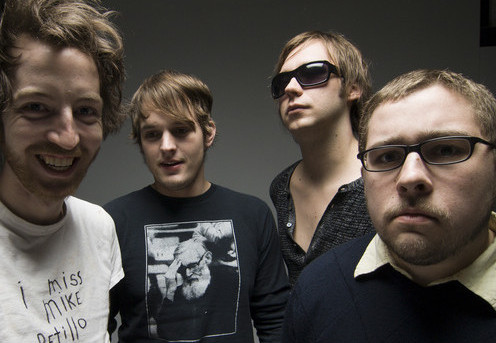 NT: The band hasn’t seemed to have chilled much since the ‘Shallow’ days, do you still feel the same sense of urgency when writing music?

MK: I don’t know if I’d call it urgency, especially since it took four years since our last album! I just think we all really enjoy loud, noisy, abrasive rock music, so that’s what we’re gonna keep on playing. I can kind of understand how many hardcore bands tend to mellow over time, it can just get kind of exhausting to do the same heavy thing over and over, but I think we just find it to be incredibly pleasant.

NT: You worked again with Alex Newport on the new Album, what kind of element does he bring to the band’s sound?

MK: Well, he’s a marvelous technician. He knows how to get the best possible sounds out of our gear, he pushes us to really consider our performances and make sure the best possible take is used, and he just encourages us to give it our all. It really helps to have all of that, plus he’s a great guy, with the same sardonic sense of humor as us.

NT: How did you get Mark Proksch (The Office) on board with the video for ‘Bathroom Laughter’?

MK: That’s a question for Joe Stakun, the director! He is apparently a man about town. I can only hope this leads to more NBC sitcom stars getting involved in hardcore punk.

NT: Are the Insurance days behind you for good?

MK: Nope, they remain painfully in front of me.

NT: Was it tough growing up where you did, it seems to be a pretty conservative area?

MK: Nah, I had a pretty great childhood. Not too many harsh memories. I suppose it’s conservative, but that makes for an easy target to rebel against.

NT: Am I a little off base by suggesting there might be a bit of a Prog-Rock influence on ‘Honeys’?

MK: Probably! I think we all dig some prog-rock, there really isn’t any style of music we’ve all written off completely, but I don’t think we intentionally brought any prog influences to the table on ‘Honeys’, or any record before really. In fact, if it sounds like we are getting proggy to some people, maybe it’s time we took a step back and re-assessed. I never want to use too many notes.

NT: Did Billy Joel have a tiny bit of influence on the band?

NT: Which five albums continue to have an influence on you (Excluding Wrestlemania 2)?

MK: There are so many! I suppose from my perspective, five albums that have really helped inform our musical direction would be Ivy Green’s self-titled debut, X’s ‘Aspirations’ (the Australian X, that is), Danzig’s ‘I’, The Birthday Party’s ‘Junkyard’ and Omar S’s ‘It Can Be Done But Only I Can Do It’.