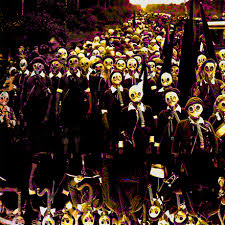 The Manchester based trio NO CEREMONY// have released their debut single ‘Hurtlove’.

Having emerged as one of the acts to watch at SXSW (Los Angeles Times for instance singled them out as one of the festival breakouts) and embarked on a US tour with acclaimed art pop outfit New Build, NO CEREMONY// are getting ready to release their first proper single, “Hurtlove”, on their own label NOC///, this May. A beautiful, haunting swirl of emotive piano chords, pounding beats and snatches of strangely mechanized, heartbroken vocals, sounding like a post-rave anthem gone sclerotic with sadness. It epitomizes exactly what NO CEREMONY/// do best, which is situating a beating heart in amidst the shiny electronica; the sorrowful ghost inside the machine.

NC/// have a much anticipated debut LP due later in the summer and more live UK dates to be announced shortly,NO CEREMONY///