No Age To Release ‘An Object’ via Sub Pop 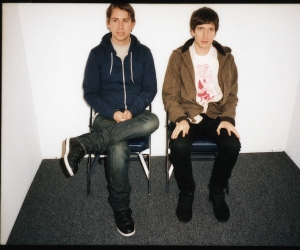 No Age will release An Object, their 4th album, on CD, LP and digitally August 19 in UK & Europe and August 20th in North America via Sub Pop.   The album, led by highlights “I Won’t Be Your Generator,” “C’mon, Stimmung,” “An Impression,” and “Lock Box”, was recorded by F. Bermudez and No Age at Gaucho’s Electronics in Los Angeles.

As the title An Object suggests, these eleven tracks, produced by No Age and their long-time collaborator Facundo Bermudez, who recorded tracks on their Weirdo Rippers LP (2007) and toured with the band in support of Everything In Between (2010), are meant to be grasped, not simply heard. Whether in the fine grit of Randall’s sandpaper guitar scrapes on “Defector/ed,” or Spunt’s percussive stomp and crack on “Circling with Dizzy” and “An Impression,” created largely through the direct manipulation of contact mics, these are songs that pivot on the sheer materiality of music-making. Spunt’s creative deployment of bass guitar accented through a modified speaker on the beautifully catchy “I Won’t Be Your Generator” is a case in point: even at its most lyrical An Object incorporates the process of its creation into the very backbone of the songs
http://www.subpop.com/artists/no_age