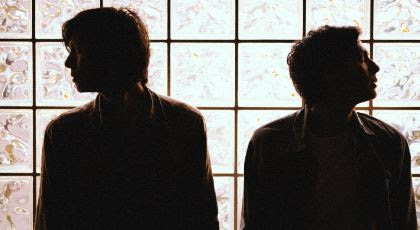 Today, the Bay Area’s newest up-and-coming duo Nine Pound Shadow – Danger Mouse’s latest signing to 30th Century Records – has released a dreamy psychedelic video for single “Tell Me Why,”. “Tell Me Why” is an introduction track to Nine Pound Shadow’s woozy, folk-pop sound, and is featured on their newly released, self-titled EP.

Says the band about the video, “‘Tell Me Why’ words: The mind is a haunted house crowded by the ghosts of a million abandoned dreams. On the other side of a closed window, closer than close, burns a vision of true love. We belong in that paradise. If only we knew how to open the door.”

Nine Pound Shadow will also be hitting the road this winter, opening for Electric Guest on select dates, listed below – tickets are on sale now.

Nine Pound Shadow is brothers Brendain and Christopher Langlois, whose sound is a mix of 60s psych haze, Kings Of Convenience, the clouds of harmonies on the song “A Horse With No Name” by America, and a splash of a few dazzling California sunsets for good measure. Their debut single, “Melody,” caught the attention of Danger Mouse, who included the song on last year’s 30th Century Records, Volume 1 compilation, and signed the band to the label. Their EP, which was produced by Asa Taccone.

Tiger Smile
Bridges
Tell Me Why
Melody
Bright As Gold