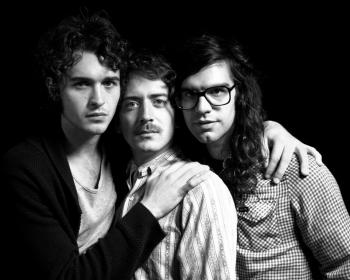 Currently on the road with both Django Django and fellow Minneapolis group Poliça, Night Moves are getting ready for the release of their debut album in the UK on Monday. Ahead of that however, you can now stream the album’s title track – ‘Colored Emotions’ HERE.

With inspiration ranging from Pink Floyd and Todd Rundgren to Curtis Mayfield and Neil Young, it’s unsurprising that the band worked with producer/mixer Thom Monahan (Vetiver, Beachwood Sparks, Devendra Banhart) to tighten and brighten the album. However, it’s the album’s apparent maturity that separates it from many debut releases.

The core members of Night Moves, guitarist/lead vocalist John Pelant, bassist Micky Alfano and multi-instrumentalist Mark Ritsema, grew up together in the Twin Cities area of Minnesota and spent their younger years rotating in and out of one another’s musical orbits. After a couple of promising false starts, the trio re-coalesced in 2009 in earnest as Night Moves and began recording. Since then, the band has been joined by drummer Jared Isabella completing their live set-up.

The single ‘Country Queen’ is also out on March 25th, and you can watch the video for   it  HERE.