New Tricky Album Out May 28 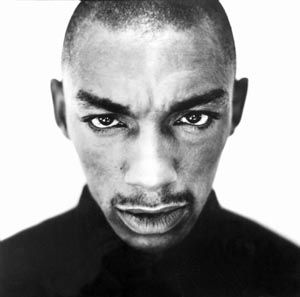 Tricky is back. Back with a new studio album, False Idols, and his own new label (also bearing the False Idols name), but also back in a personal sense. “I was lost for ages,” he says. “I was trying to prove something to people, trying to do something to please other people and also myself at the same time, which is never going to work. To be honest with you, I’ve been floating around since Chris Blackwell and Island. My last two albums, I thought they were good, but I realize now they weren’t. This album is about me finding myself again.”

Adrian Thaws is, perhaps, being a bit hard on himself. However, there is no doubt that False Idols stands as his most accomplished album since his earliest works. It opens with a cover of a Patty Smith song, “Somebody’s Sins,” which sees Tricky and vocalist Francesca Belmonte whispering “Jesus died for somebody’s sins, but not mine” over a sparse groaning bass. The lead single “Parenthesis,” which features vocals from Peter Silberman of The Antlers, has more rhythmic grunt, which gives a different dimension to the dark gothic atmosphere that pervades the record. No-one does this kind of thing better.

The spirit of Tricky’s ‘90s output looms large over False Idols. There are times when his entire career has seemed like a stubborn refusal to be defined by its success or sound. He has finally come to terms with it, even learned to embrace it. The lightbulb moment came when he was sending demos to a friend. “All the songs which were easy for me to write, which I wrote in two hours, he sent me a message saying, ‘This is why I loved you in the beginning.’ The stuff that I’d thought about more, that stuff he was like, ‘It’s OK, yeah.’ So then I knew. It brought me back to my natural instincts.”

The resemblance to Maxinquaye is undeniable, though the material on False Idols is gentler; more mature. “Of all my records, the majority of people are into Maxinequaye,” says Tricky. “That’s because it was a time and a place. Maxinquaye was a part of their life. Some people say it was the soundtrack to their youth. You can’t challenge that. But musically this is a better album.” He pauses before adding. “Of course I know that people might not agree with that.” Let’s just say it’s a stunning return to form and leave it at that.

Many of the songs on False Idols feature artists signed to Tricky’s new label, including 24-year Londoner Francesca Belmonte and Fifi Rong. The album also includes collaborations with Nigeria’s new global star Nneka, the afore-mentioned Peter Silberman. In the months before the album’s release, False Idols will also release an EP “Matter of Time” showcasing the label’s roster on new non-album material produced by Tricky.

Why the name False Idols? “Because there’s so much bollocks going on at the moment mate,” Tricky fires back. “People follow celebrities and read every little thing they do. It’s living vicariously through someone else. Get your own life. All this stuff is false idols. That’s what helps keep the status quo.” As to the label’s mission, Tricky puts it thusly: “I signed to Island because of the artists and some of the stuff they’ve done—Bob Marley, Tom Waits. Who could I sign to now? Am I going to sign to a label because they’ve got Lady Gaga? I don’t want to be part of that bollocks music industry. I’m trying to bring that Island kind of thing back. Obviously False Idols is never going to be an Island Records, but it’s my way of trying to keep that part of the music industry going.”

“This new album I’ll stand behind every track,” Tricky says. “I don’t care whether people like it. I’m doing what I want to do, which is what I did with my first record. That’s what made me who I was in the beginning. If people don’t like it, it doesn’t matter to me because I’m back where I was.”

15 PASSION OF THE CHRIST