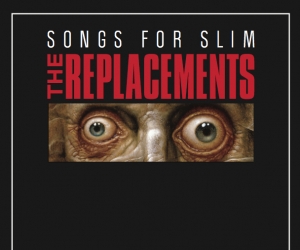 After last month’s special Record Store Day release, it’s back to regular monthly auctions for Songs For Slim, a non-profit project created to benefit former Replacements guitarist Slim Dunlap, who is still recovering from a massive stroke that he suffered last year. May is National Stroke Awareness Month, and Songs For Slim is glad to be doing its part in helping assist the many organizations that are dedicated to promoting stroke awareness and prevention.

This month we’re excited to announce a single with fantastic tracks from Jakob Dylan and Joe Henry. Dylan and his crack band of A-list LA session players (Jennifer Condos, Jay Bellerose, Greg Leisz, Keefus Ciancia and Val McCallum) offer up a rollicking, bluesy interpretation of “Ain’t No Fair (In A Rock ‘N’ Roll Affair),” a classic Slim rocker and crowd favorite. Recorded in North Hollywood and produced by Joe Henry, “Ain’t No Fair” also features a guest appearance by John Doe on backing vocals. Speaking of Joe Henry, his work over the last three decades has made him a favorite of discriminating music fans worldwide, distinguishing himself both as an ever-evolving solo artist and an in-demand producer. He’s also been a key part of the Songs For Slim project; his contributions as producer for several of the SFS releases have been invaluable. This month he takes center stage for an impassioned reading of “Taken On The Chin,” Slim’s mournful journey to the dark side of life. Henry delivers a stunning vocal performance as he and a slightly different batch of fab session-eers (David Piltch, Jay Bellerose, Val McCallum, Greg Leisz, Patrick Warren and his son Levon) masterfully create a piece that hits the listener straight in the gut with an emotional wallop that won’t soon be forgotten. It’s brilliant on every level.

The Jakob Dylan / Joe Henry single is limited to 100 numbered copies and, like all SFS releases, features original Chris Mars artwork on the picture sleeve. All copies have been signed by Jakob and Joe. As an added incentive, the person with the highest final bid on all of these auctions will also receive a complimentary pair of beautiful and masterfully-crafted wooden headphones, courtesy of LSTN. This auction will be accessible via SongsForSlim.com and runs March 15-22.

After unavoidable manufacturing delays due to recent strong demand for vinyl products, the last batch of SFS singles has been mailed to auction winners. Thanks to everyone for their patience. Future mailings should go out more promptly following auction closings.

Reminders: The 12-inch vinyl version of The Replacements’ Songs For Slim EP(same track listing as the limited 10-inch auction version but without the deluxe packaging) is now available through regular retail channels everywhere. And the Lucinda Williams/Tommy Keene and Steve Earle/Craig Finn & Friends singles are now available digitally via iTunes and Amazon. The recent special Record Store Day release won’t be available digitally until July 23 due to the standard 90-day RSD exclusivity agreement.

Don’t forget about the Songs For Slim online store:merchlackey.com/songsforslim, which is selling t-shirts, slip mats, bracelets and necklaces, with specially-priced bundles also available. Like all SFS projects, all proceeds go towards assisting Slim and his family.