New Single From ‘Saturday Looks Good To Me’ 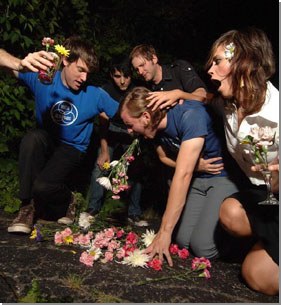 TwitterPinterestPocketRedditFacebookEmail
Ann Arbor’s Saturday Looks Good To Me will release a new LP, One Kiss Ends It All, on May 21 with Polyvinyl Records. Stream their new track “Break In” above.

In their decade-plus existence, Saturday Looks Good To Me has never taken a typical path: endless line-up changes, shifts in sound from lo-fi 60’s pop to experimental noise rock, a twisting discography heavy on one-off singles and bizarre package tours with afrobeat and freakfolk bands.

In 2012, bandleader and songwriter Fred Thomas returned with a new band line-up, including new vocalists Carol Catherine and Amber Fellows, but also with old friends from previous SLGTM incarnations like bassist Scott DeRoche and drummer Ryan Howard showing up for the fun. The band’s fifth proper album, One Kiss Ends It All, came together following the group’s first tour after getting back in action, but the four years since their last full-length weren’t spent cultivating this new batch of songs. Instead, a spontaneous and breezy vibe flows through the album’s 12 selections, drawing on the reference points of 60’s pop and early indie rock, all filtered through the band’s skewed pop lens.

Saturday Looks Good To Me

One Kiss Ends It All

9. Are You Kissing Anyone?