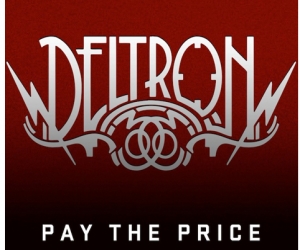 Bulk Recordings has announced the return of Deltron 3030 with the release of Deltron 3030: Event II on October 1st, 2013. The album is Deltron 3030‘s long-awaited successor to their self-titled debut. Deltron 3030 — composed of a trinity of alt-rap all-stars: rapper Del The Funky Homosapien, producer Dan “The Automator” Nakamura and DJ Kid Koala — are celebrating the announcement with the debut of the album trailer, set to the first track on the record “Stardate.” The clip, which features Joseph Gordon-Levitt. In anticipation of Deltron 3030: Event II, the band will also release their City Rising From the Ashes EP on August 13th, 2013.

Individually, the collaborators of Deltron 3030 stand at the top of their respective musical disciplines; together as Deltron 3030, they warped space, bent time, transcended genre and blew minds with Deltron 3030, an album that still stands today as one of the most important records in the annals of underground hip-hop.

Both timely and avant garde, Deltron 3030 accurately – if surrealistically – captured the spirit of the cusp of the millennium, an era when a technology-driven stock market bubble was on the verge of bursting, when the political world was entering an era of unprecedented partisanship, when global inequality was beginning to skyrocket.

Del The Funky Homosapien, founder of Oakland’s seminal Hieroglyphics crew, launched his career as part of his cousin Ice Cube’s posse, da Lench Mob, and gained recognition as a top-tier hiphop verbalist with his 1991 debut, I Wish My Brother George Was Here, featuring the memorable tracks “Mistadobalina” and “Dr. Bombay.” He would release three more albums -1993’s No Need for Alarm, 1998’s Future Development and 2000’s Both Sides of the Brain – before joining with Nakamura and Koala for Deltron 3030.

Kid Koala, a native of Vancouver whose turntablism mixtape Scratchcratchratchatch, recorded on cassette while a university student, brought him to the attention of superstar British DJs Matt Black and Jonathan More, better known as Coldcut; the duo signed him as the first North American artist on their new label Ninja Tune, launched as a haven for the world’s most exceptional DJ and EDM talent. A year into his signing, Koala met Nakamura at the New York show of his first U.S. tour; the two hit it off immediately, and beginning with Deltron – Koala became one of The Automator’s most frequent collaborators.

Nakamura began to make plans for Event II shortly after the three principals reunited for Gorillaz, the 2001 multiplatinum debut album of the “virtual band” conceived of by Blur frontman Albarn and illustrator Jamie Hewlett, which Nakamura produced, with Koala providing masterful scratchwork and Del lending his lyrical brilliance to its biggest hit, “Clint Eastwood.” Though initial tracks had been laid down by 2005, it would be another eight years before the record would be finished to their mutual satisfaction. The album will be released in October on Nakamura’s Bulk Recordings label, and when it does, it will open a new chapter in the Deltron 3030 legend – one that promises to be as relevant and resonant now as the first was in the year 2000.

“This time, the album has a specific story,” says Del. “The Deltron world has gone too far with technology. Everything’s destroyed, and you just see the remnants of our technology. The streets are run by criminals, the police are outnumbered and outgunned, and we’re like pirates, running rogue, doing what we do to survive. That’s the scene of it. We’re trying to be as literary as possible while dealing with a musical format. I don’t know if you could even categorize this as a hip hop album – it’s more like a rock opera, but using rap.”

He notes that the words, music and narrative have been deliberately chosen to put listeners into a specific emotional state. “This record took 13 years, and the whole time fans are telling us we better come out with Deltron right now – quit teasing me,” laughs Del. “Well, this is beyond a regular album. Because I would say, me, Dan and Koala, we aren’t limited by what other rap groups do – we’re musicians first. I studied music theory for ten years. Dan and Koala been learning music since they were kids. We’re bringing it all together here, everything, and the fans, the critics, they all going to be surprised by what we got. You’ll see.”

13. What Is This Loneliness (ft. Damon Albarn and Casual)

1. City Rising From the Ashes (background vocals by Mike Patton)