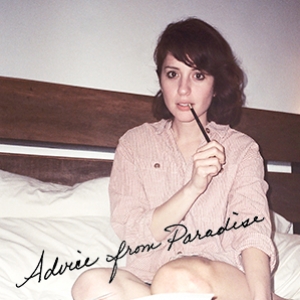 L.A. RECORD has announced that they’ll be hosting a love advice column by self-proclaimed love guru and singer extraordinaire Nedelle Torrisi. Send in your questions. Get them answered. Don’t be shy. All love subjects are welcome from emotional to unusual to sexual and everything in between. Ask anonymously at advicefromparadise.com or email advicefromparadise@gmail.com Recommended song listening will be included with each response.

This self-titled album, the first Nedelle Torrisi has released under her full name, is basically the story of a friendship. A couple of years ago, she and Kenny Gilmore (of Ariel Pink’s Haunted Graffiti) lived in the same house in Los Angeles. Through a wall she could hear Kenny playing keyboards and guitar, and he could hear her making demos of the songs on this album. At one point, he passed her a tape of his own music where he beguilingly recorded and performed all the songs himself, so when it came time for Nedelle to make the proper album, it seemed natural to knock on his bedroom door and ask for his expertise. At the time they never could have known the album would take a little more than two years of diligent work after the initial two weeks of studio time in which they slept in the studio and barely saw sunlight, for they would work between every tour they went on (Gilmore and Nedelle play with APHG, and Sufjan Stevens, respectively.) Not to mention the time Gilmore’s computer containing the recording sessions got left behind in a taxi cab in Russia.  Which led to a four month hiatus before the powers of persistence, faith and loopholes in customs, delivered it safely back to Los Angeles.

Here we find what can be simply be described as Gilmore’s sonic vision of Nedelle’s songs based on the original demos that she made.  Kenny played the majority of instruments on the album as well, with a little help from Julia Holter, Ramona Gonzalez (Nite Jewel), and Dev Hynes (Blood Orange).

No matter how her albums have been produced in the past (either with her previous band Cryptacize with Chris Cohen, or the handful of solo records released under her first name) her songs have a distinct and unmistakeable tone.  Musically there is a mix of girl-group/Brill Building era pop, (her choruses reach for that age-old notion, “the hook”), musical theater, (she has good diction and a penchant for Busby Berkeley-style grandeur), not to mention the omnipresent melancholy often found in her sophisticated melodies and chord progressions.  There is also a hint of “quiet storm” R&B on this album which has been an favorite of Nedelle’s since childhood, hence the echoes of artists like Sade or Anita Baker on tracks like “Perfect Timing,” “Psychic Returns” and “Cathartica.”

Lyrically she is always concerned with matters of romance, and won’t hesitate to belt “I wanna be with you! That’s why you came into my life!” or “I was born to love you, and so I will.”  The songs always reveal a specific story from her life, though the lyrics remain cryptic enough to sound universal, as well. (“Born to Love You” is about falling in love with her long-dead, favorite author, “Cathartica” is about looping on a thought while having insomnia, while “I Love Thousands Every Summer” is about moving to a big city and feeling isolated.)