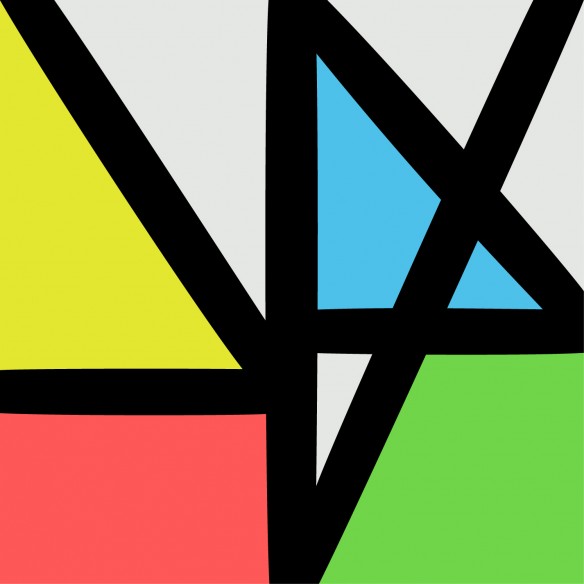 With much anticipation and fanfare, New Order returns on September 25th with Music Complete, its 10th studio album and debut for Mute, a decade after its previous release, Waiting ForThe Siren’s Call. The upcoming album sees the reappearance of former keyboardist and vocalist Gillian Gilbert and the absence of original bassist Peter Hook who is involved in an on-going feud with the other band members (frontman Bernard Sumner, Stephen Morris, Tom Chapman, and Phil Cunningham). While Music Complete was mainly produced by the band, Stuart Price lent a hand with the production process on “Superheated” and Tom Rowlands of the Chemical Brothers worked on “Singularity” and “Unlearn This Hatred”. Long-time collaborator Peter Saville took the reins on art direction, creating the Piet Mondrian-inspired album cover. Guest artists Iggy Pop, Brandon Flowers, and La Roux’s Elly Jackson provide vocal support on select songs.

Music Complete is quite the audaciously ambitious album title and the songs on display don’t exactly accomplish this aggrandized promise. What the tunes do, however, is either live up to the legacy of New Order’s aggressively dance-based sound and pace or go even more extreme in length, repetition, and intensity. The sonics attack the ear with energetic, unrelenting and unvarying tempos, cycling synth, guitar, and drum patterns, and repetitive vocal refrains. What is at first an exciting listen turns into an exhausting exercise by album’s end. When taken piecemeal, each song stands strongly on its own, but when listened to collectively, the album overwhelms.

Songs from New Order’s past that exude a looser effervescence or smooth melancholy, like “Bizarre Love Triangle” and “Regret”, respectively, or a bleak, but still dancy, despondency, like “Blue Monday”, are MIA on this album. What has taken over are expertly constructed, but assailing tunes in perpetual motion that move the body, but don’t touch the heart. Think “The Perfect Kiss” for its frenetic and droning instrumentation and over-ten-minute length to get an idea of the design of Music Complete. Monotony is the result of redundancy and it’s left up to Bernard’s vocal delivery and the song lyrics to bring the human element to the robotic synth-pop/rock format. Deep emotion and complex lyrics, however, have never been at the core of New Order. The band’s word compositions have always balanced between creativity and banality, naturally hedged in by the short-phrase structure of the dance-pop format. The classic New Order song “True Faith” triumphed lyrics-wise over its limited synth-pop style, but you’d be hard-pressed to find its kind on Music Complete.

For one who has stated in print that he doesn’t much like to look back at the past, Bernard does a lot of that via the lyrics. He expounds on previous relationships and lost love and love in general – a lot – in a refined, anodyne voice that hasn’t aged a day since the start of the band. Trenchant to trite lyrics exist side by side with lead single, album opener, and message-centered “Restless” (There’s an apt titular descriptor for the album!!) packing in the words for maximum impact. The supple bass line run, guitar chime, sweeping synths, and kicky drum beat are comfortingly familiar, along with Bernard’s subdued, but pointed vocal tone. On verses that comment upon the desires and apathy of today’s youth, Bernard opines “I want a nice car / a girlfriend who’s as pretty as a star / I want respect…” The bass line dives under while the drum engine drives on, pushing the song ever forward, towards the downbeat, short-phrase chorus “I feel so restless/ Ain’t got no interest / I couldn’t care less / Can’t be a success.” All is not lost though, as the realization hits that love is the saving grace and that “It’s not hopeless / if you take less.” The social missive rings out loud and clear and it’s up to the listener to decide if it’s a heavy-handed edict or an uplifting declaration.

Bernard and company peer into the past on the post-punk, dance-pop noir of “Singularity”. A foreboding atmosphere of slow bass line, skittering percussion, and cymbal tap rhythm is inundated with little, hard-popping electro-notes, before being whisked up in a rapid drum beat. On the chorus Bernard emphatically honors the “…lost souls / who can’t come home / For friends not here / we shed our tears.” Discordant sounds like abrasive noise and an ascending-in-pitch note create a disorienting, unpleasant aural space as Bernard states “I can feel your presence…” Next number, the Pet Shop Boys-like “Plastic”, comes across as lyrically vapid, but maybe that’s the point. It runs on a speedily increasing Motorik tempo and is peppered with fluctuating percussive notes. Bernard sighs gently “Give me direction / out of the cold / Show me affection / I’ll give you my soul.” and is backed by Elly Jackson of La Roux’s exclaimed vocals on the chorus. Like its title, the song describes a superficial relationship, with Bernard trying to justify the union by spouting simplified superlatives on the chorus like “so special” and “so iconic”, when there isn’t really anything there for the couple to share. In an interesting twist, Bernard’s voice becomes more emotional at the very end of the song, but is it due to true feeling or computer manipulation?

The Euro-pop confection “Tutti Fruitti” can be alternately described as amusing, Autotuned (at times), acute (sonically), and airheaded (lyrically) and could be about drugs or a relationship – or both (or maybe it’s about ice cream?). It starts off with deep male vocals speaking in Italian amid bouncy notes, shuffling percussion and a clacking drum beat. Bernard comes in with his vox tweaked a bit amid percolating electronic notes as he sing-talks in a sing-song style “You got me where it hurts / but I don’t really care / ‘cause I know I’m OK/ whenever you are there / You take me to a place / I always want to go / you always make me high / whenever I feel low…” Elly Jackson mirrors him on the chorus, adding some welcome vocal dimension. There’s a lighter, skipping feel to the song with its occasional bright synth tings, piano notes and violin sway that recalls the airiness of certain past New Order tunes. The chorus section is repeated way too often though, making the conclusion of “Tutti Fruitti” not as much fun as its commencement.

Elly Jackson is featured again on the jammin’, house-styled “People on the High Line”. Pronounced piano strikes, shuffling and finger-snapping percussion, and a thumpin’ beat form the backdrop for Bernard and Elly to confess “I need your love.” It’s a super-lively tune (Dig that cowbell!), but it wears the listener out, at least at this point in spinning the album as a whole, and it’s chock full of shallow lyrics and casual vocals that are devoid of deep emotion. But chalk it up to the ingenuity of the songwriter(s) to shift the denouement just a bit and shade Bernard’s vocals with more feeling…

Mid-way through Music Complete, New Order takes a strange and unsettling detour into alt-rock noir territory with the inclusion of the bleak and menacing “Stray Dog” storyteller which is presided over by Iggy Pop, no less. Doing his best dire Nick Cave impression, Iggy Pop (s)talks through the ominous, nocturnal ambience of chirping crickets, cicada-like sounds, a gritty, low-slung rhythm, and hit-metal beat. Urgently drawn strings shadow Iggy Pop’s deeply spoken vocals as he intones that he and his love created “…a memory that will last forever / in those days that we spent together.” He spins an intricate and intriguing yarn about a man who chooses to stay with his partner and not stray into “the mire”, except that “…nothing stays the same / We are forever moving / like the dancing of a flame / Life is so unstable / Always changing / It never stays the same.” He speaks with a dirge-like finality amid the awkwardly fast pace of the sonics. Rough guitar lines, piano notes, pick ax-on-rock pounding sounds, fluid keyboard notes, high-pitched notes, reverb guitar lines, and eventually softer, bittersweet synth pulls all make their presence known, but Iggy Pop is at its fixed center, exuding a dangerous aura that befits the disquieting lyrics of the song.

The band gets back on its traditional route with “Academic” which recalls classic New Order. The running bass line takes off, the synths swell and plunge, and a cantering pace builds up. Bernard becomes more vocally expressive, musing on the verse that “I was aware that danger lay ahead and I couldn’t bear this stranger in my head / Have you got a face? Have you got a soul? Well, he don’t got nothing…” Buzzing, wiry guitar lines, the continuously flexing bass line, and synth strings dance around Bernard’s despondent words as he broods upon the state of academic (and life) affairs, admitting that “I gave up trying a long time ago / Your fate was designed/ but you didn’t know…”

Relationships go back on the front burner for the message-oriented “Nothing But A Fool” with Bernard sing-talking starkly that “I came across the one I lost.” He regretfully recollects that “Sometimes you don’t know what you got” and “I still love you but what can I do?” amid a darker tone of rapid synth notes, Western guitar jangle, shaken rhythm, and cymbals hits. On the chorus Bernard delivers his apparent dispatch with the words “You think you’re better than the rest / and the world belongs to you / but you’re nothing but a fool.” The sonic agitation reaches a high level of irritation at this stage of the album and once again the song goes on for too long. Like several prior tracks, it needs to be trimmed of superfluity. And if the instrumental frisson could be tempered to a mild simmer and dreamier synths (or other mellifluous sounds) added, the effect would be more pleasant.

The most obvious lyrics of Music Complete are the “love will conquer all” sentiments of “Unlearn This Hatred.” Bernard targets a specific relationship (and not the universal human condition) and his emotionally muted vocals continue unwaveringly against aero-space buzz, winding sitar-like lines, and bright electro-notes. A house-styled rhythm pops up again with sporadic skittering and clapping percussion and high register synths. A speedy swirl of sounds can’t disguise the weak lyrics that have Bernard stating in sing-song fashion “When it’s time / If you’ve got faith / For your healing / I can’t wait.”

The band saves the best for near last with the radiant, exultant “The Game” that harks back to classic New Order songs of the past. Shining synth lines mingle with shimmering keyboard notes and a rapid drum pace. Guitars and synths prevail in equal measure as Bernard caressingly and assuredly, if a bit cryptically, sings “It’s so near / but we can’t touch it / But it is here / and we love it / …life is good and it’s forever / It’s in our blood and our endeavor.” He’s backed by other vocalists, sizzling electric guitar lines, stirring synth strings, and cymbal glimmer, strong in his conviction that “…life is pure and it is special.” Music Complete would have ended on an exceedingly high note if it had stopped there, but it tacks on one more tune.

Bernard gets super-personal on “Superheated”, going down memory lane and reminiscing about a past relationship that didn’t work out. He acknowledges he was the problem and offers an apology via song, singing in a vulnerable, wistful tone “We are so different / yet we’re the same / Things that I remember / that I wish I could change.” Delicate harp runs, placid synth lines, quickly jotted electro-notes, and a Motorik pace accompany him on the verses, while an emotive Brandon Flowers of The Killers sweeps in grandly on the chorus. It’s a poignant song and the most human of the album, and while it’s not as killer sonically as “The Game”, it’s a sweet to wrap up Music Complete.