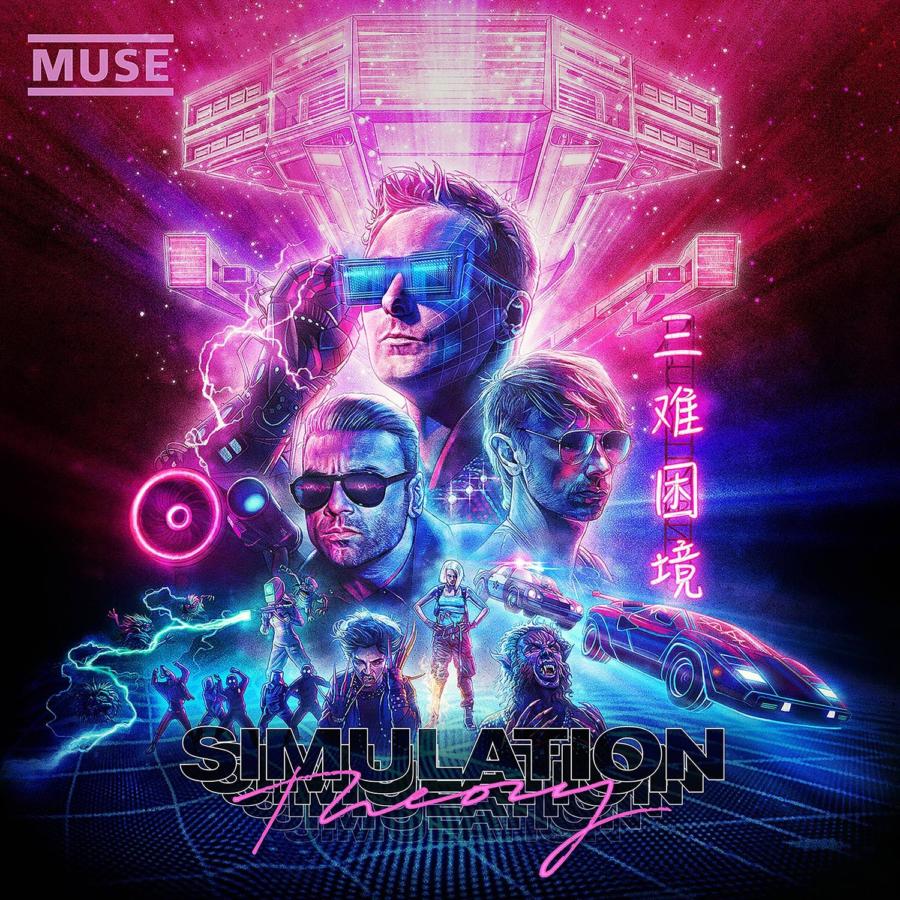 After a handful of albums pushing through orchestras, electronics and back through rock again, Muse has found a way to make them all feel a lot more natural together. As a long-time fan of Muse, I’d started to wonder if I would enjoy their music again outside of a live show. Through an admittedly b-movie like exploration of 80s synths and production on the whole, Muse return to a lot of their pre-2nd Law writing style for a really exciting listen. Though it’s certainly a little less original than Muse used to be, this is a great return to form for them hidden under what initially comes off as shallow.

Like a half-step between an 80s score and Muse’s core theatrics, “Algorithm” is often a bit cheesy tonally but passionate in its delivery. Though it presents itself as a little over-the-top at first, there’s a glamour and general charm that it uses to actually set the tone for the rest of the record, while feeling, memorable in its own right. Though “The Dark Side” itself is a much more straightforward approach to this chip-tune and electronica-infused side of their sound, they craft strong and dark tunes, while also tapping into a bit of “Hysteria” even. With all of Matt Bellamy’s soaring vocals, and the generally throwback feeling of the record, it would be fun to see him go hilariously over-the-top a little more on the record. “Pressure” cuts in however with their usual hard riffing and a lot more strangely modern-pop production than usual for Muse. While the production ends up neutering the song lightly, this is still by far one of the most fun tracks to put on again and again.

Muse tackle a lot of weird musical approaches on “Propaganda” mixing Nine Inch Nails with George Michael and Prince, along with strange vocal effects all their own. While it does make for a much more abrasive listen, there’s something powerfully unique to it.

As they start to twist in Resistance and Absolution-era sounds, Muse finds themselves getting wonderfully heady and simultaneously funky on tracks like “Break It To Me.” However their balance of modern pop on the album becomes way too overt on “Something Human” where all the commonplace tones of the track hit the easy radio writing in a way that feels out of place on the record and next to most Muse songs to be totally honest. Unfortunately this just stands out as a weak point of the record, that only taps into a bit of their talents as a whole.

As they get grimy and anthem-like on “Thought Contagion” they bring all their older riff power to the forefront, and use all the tonal experimentation of their last records to make a colourful single worth hearing. As a Frankenstein summary of their styles throughout the years, this track is surprisingly exciting. This is flipped from the opening vocals of “Get Up and Fight” that unlike some of the surprisingly fun pop work Muse has been able to deliver in the past, feels very Top 40 with only a ghost of who they are as a band. To this end, the track’s rock moments themselves feel strangely pop-punk and drain a lot of the interest you can get out of them at least trying something new. Right as you hit the kind of loud and proud rocking of “Blockades” it takes a little time to get over its overtly simple sheen. In this way however it too blends all the metal chugging, sprawling beats, thought-provoking melodies and nearly operatic writing into a track that brings out the band’s long unused Phrygian riffing into something fun.

If you’re looking for the really unique pop-driven single of the record, “Dig Down” holds that feeling best, while still tapping into the band’s great penchant for harmonies. It’s nice however that they’re able to make so many of these strong songs actually fit into the world of their record without feeling stretched. Even the more narrative-focused writing of “The Void” which itself brings out Muse’s long gone pianos, subtle strings and overall more minimalist synth use, is able to expand into this aesthetic while still standing tall.

Though they are limited to bonus versions, the alternate takes of songs are really cool. We get even more over-the-top production, old-school Muse piano takes, marching bands and mixes that are strangely closer to their influences. These offerings are admittedly a little more scattered but hearing a gospel take of “Dig Down” is worth the time. Even while it’s clear that they are less suited to the album as a cohesive unit, it still makes for some excellent tracks outright and a cool mini companion to the album itself.