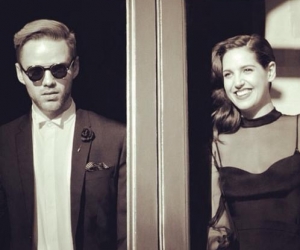 New York City based act MS MR have filmed an official video for “Hurricane,” the first single off of their upcoming debut release Secondhand Rapture out May 14th on Columbia Records.  Filmed in Southern California by writer / director Luke Gilford, the video is a bewitching glimpse into otherworldly experiences of suburban youth.

The duo recently announced that they’ll complete a set of headlining dates around the release of Secondhand Rapture in May.  This run will include a night in their hometown at Bowery Ballroom in addition to dates in Philly, Chicago and Columbus (full list of dates below).  MS MR will also make their debut on summer festival bills including Sweetlife Festival, Boston Calling, Governor’s Ball and Lollapalooza.

MS MR is the moniker of Lizzy Plapinger and Max Hershenow.  The duo’s debut album Secondhand Rapture is comprised of 12 tracks and was produced by Hershenow, with additional production and mix by Tom Elmhirst. The album showcases their blend of pop, featuring tracks such as “Bones,” which was recently featured in HBO’s Game Of Thrones season trailer, the band’s UK single “Fantasy,” and “Salty Sweet,” a track that has quietly surfaced on the internet after its debut in the Pretty Little Liars series.  Fans can hear more of MS MR’s new music on their upcoming tour dates.