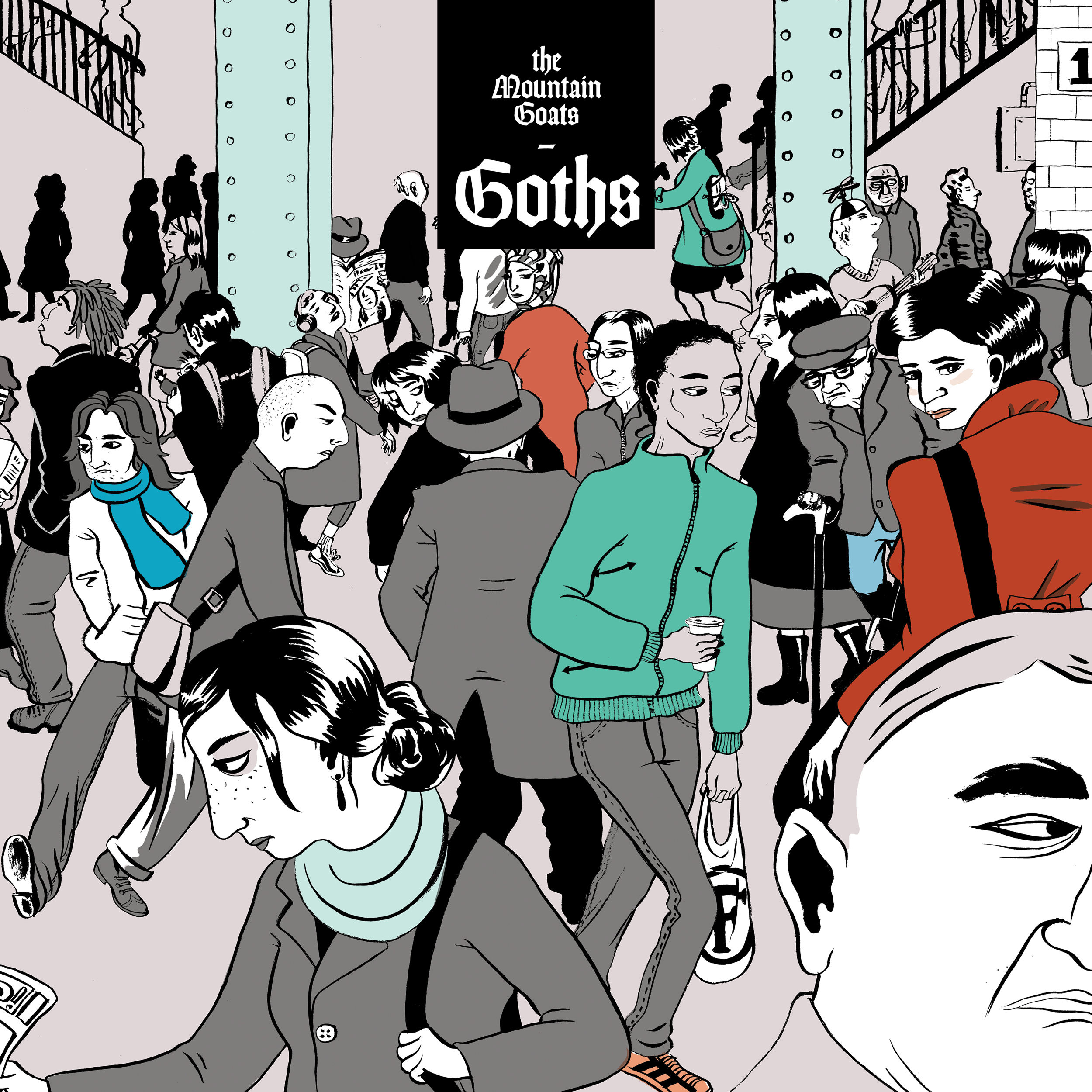 May 19th, sees the release of Goths the album from the Mountain Goats. Today, the band shares first single “Andrew Eldritch Is Moving Back to Leeds” via Spotify.

The Mountain Goats have announced a run of tour dates including several opening for Jason Isbell. John Darnielle is currently on a book tour with his new New York Times bestselling novel Universal Harvester.

John Darnielle writes of the track:

This song began its life on a 1973 Guild while I was at the beach a couple of summers back; I wrote the first verse and the chorus and then I put it away. In the darkness of my desk-drawer it gathered strength and plotted its return to the surface. I revisited it after I’d decided to not have any guitars on the next album, and finished writing it on the piano, which accounts for the mild McCartneyisms of the changes in the bridge, which are things I can’t really do on a guitar. In the lyric, I imagine one of my teenage heroes, Andrew Eldritch, returning to the town where the band worked and played when they were young. His friends give him a hard time about ending up back where he started, but not because they’re mad: it’s good to see an old friend wearing the marks of time on his hands and face like well-loved tattoos. So shall it be in these times: your sons and your daughters will prophesy, your old men will dream dreams, your young men will see visions, and Andrew Eldritch, whose music has reached spirits in every corner of the globe, will move back to Leeds.

Goths was recorded at Blackbird Studios, Nashville; produced by Brandon Eggleston; and mixed by Scott Solter. Woodwinds arranged and played by Matt Douglas. The Mountain Goats are John Darnielle, Peter Hughes, Jon Wurster, and Matt Douglas and are gothic for life.

The theme this time around is goth, a subject closer to my heart perhaps than that of any Mountain Goats album previous. And while John writes the songs, as he always has, it feels more than ever like he’s speaking for all of us in the band, erstwhile goths (raises hand) or otherwise, for these are songs that approach an identity most often associated with youth from a perspective that is inescapably adult. Anyone old enough to have had the experience of finding oneself at sea in a cultural landscape that’s suddenly indecipherable will empathize with Pat Travers showing up to a Bauhaus show looking to jam, for example.

But underneath the outward humor, there is evident throughout a real tenderness toward, and solidarity with, our former fellow travelers—the friends whose bands never made it out of Fender’s Ballroom, the Gene Loves Jezebels of the world—the ones whose gothic paths were overtaken by the realities of life, or of its opposite. It’s something we talk about a lot, how fortunate and grateful we are to share this work, a career that’s become something more rewarding and fulfilling than I think any of us could have imagined. We all know how easily it could’ve gone the other way, and indeed for a long time did.