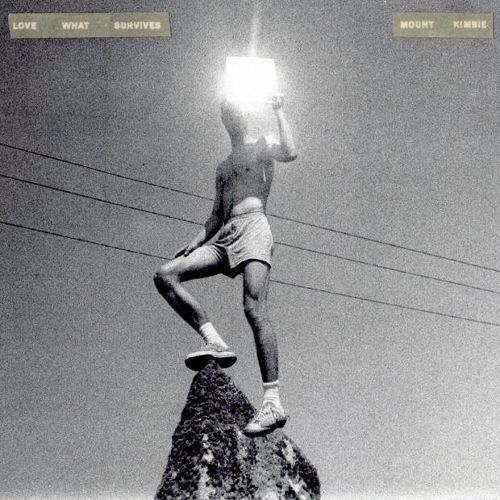 You’re either going to love or hate Mount Kimbie’s newest record, Love What Survives. If you’re hoping for a return to the post-dubstep of the band’s early years, you’ll be disappointed — the group’s newest LP follows in the footsteps of 2013’s Cold Spring Fault Less Youth, trading blips and heavy bass for a more subtle and organic sound reminiscent of summery acts like Broken Social Scene and Gold Panda. Love What Survives also marks the band’s first foray into the world of art pop and post-punk on tracks like “Audition” and “Delta.” In a world where (post-)dubstep seems to have been wiped clean from every iPod and Spotify playlist, Mount Kimbie is making music for a new era, marrying their talent for engaging, propulsive instrumentals with a generous helping of young British talent.

The record opens on a strong note with “Four Years and One Day,” beginning with a warm bath of sound before descending into a jam of pulsing bass and buzzing synths. They waste no time getting into the meat of the record, following up the first track with “Blue Train Lines,” another collaboration with King Krule that sees his passionate and engaging rap matched by a fast paced hi hat drum beat. Krule’s verse is claustrophobic and immediate, featuring graphic lines like “I lost it with a sweepstakes sigh in another fucking fight / A junkie in a queue for the lavatory line / That’s another lost sight, a stabbing of his eyes / Her veins are now popping like blue train lines.”

The record then verges into the slow and steady “Audition,” which includes a synth interlude that sounds like a hip version of Gershon Kingsley’s “Popcorn.” It’s a light touch, but an engaging one nonetheless, keeping up the pace while offering a cooldown from Krule’s harebrained vocal. Their collaboration with Micachu, “Marilyn,” is the album’s strongest cut, a smooth and sexy slow jam that further slows down the record, encouraging listeners to soak up the song’s gentle marimba and androgynous vocal.

“SP12 Beat” is the album’s first misstep, a bouncy number that gradually picks up steam but never seems to get off the ground, hitting many of the same beats as “Audition” without improving on the formula. Andrea Balency-featuring “You Look Certain (I’m Not So Sure)” is a return to form, using Balency’s matter-of-fact vocal as another instrument alongside crisp keyboards and an unshakeable bassline. “Poison” is pleasant but forgettable, a piano noodle that sounds like a ringtone or depressing commercial jingle.

Of the record’s two James Blake collaborations, “We Go Home Together” is the weakest, pushing Blake to his highest vocal register with church organs and soft tambourine. It’s another minor effort, a solid track that fails at being memorable or remarkable in any way. “Delta,” the album’s fourth single, is fun but exhausting, a car chase whose destination seems to be the acid-fueled carnival ride of “T.A.M.E.D.,” which features the haunting refrain “Think about me every day / Forever.” The breathy vocals of the first half soar, but the female singing in the second half unfortunately grates.

All of this leads to the second James Blake cut “How We Got By,” which is an effective close that’s delightfully weird and ersatz with hammer and nail percussion and slinky piano. It lends the record a subtly sad tone in keeping with songs like “Poison” and Micachu’s “Marilyn.”

Love What Survives doesn’t quite come off as memorable as the band’s previous work as post-dubstep trailblazers, but it’s a marked improvement on Cold Spring Fault Less Youth that features enough strong collaborations and inspired instrumentals to make up for its weaker tracks. While it’s far from the most memorable listen of 2017, it’s still a journey well worth taking.