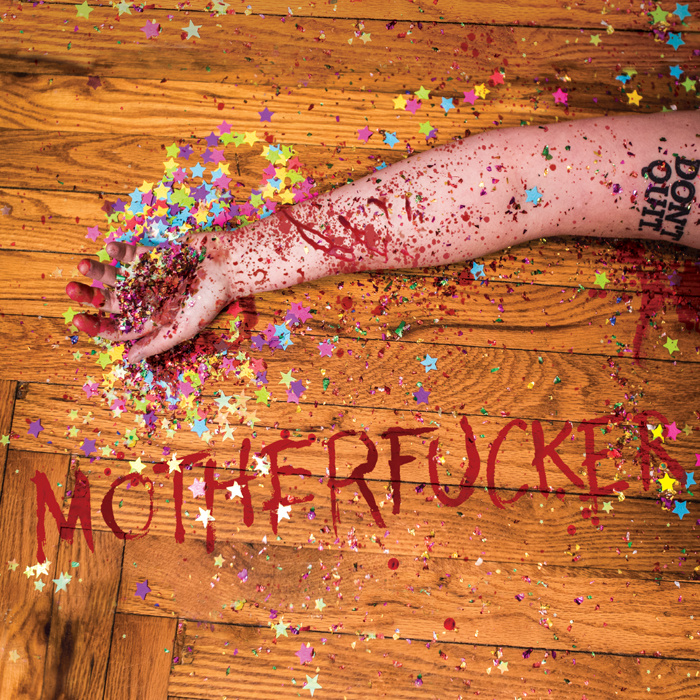 The kick-ass, in-yer-face Athens, Georgia-based trio knows how to raise a ruckus with both its indie noise-rock tunes and its highly inflammatory band name. Erica Strout (guitar), Erika Rickson (drums), and Mandy Branch (bass) aren’t ones to limit their music style with descriptive labels either, stating on their Facebook page that they’re “post post” while most music sites tag the band as sludge-rock, alt-rock, or punk. Debut album Confetti will be out on July 28th on Sick Room Records and the band members recently finished up a short tour with a gig at Athfest. Despite the album’s fun title, it’s not a wave-your-hands-in-the-air, party-rock platter, but an unapologetically down and dirty, knock ‘em dead indie rock album.

Erica, Erika, and Mandy released a 3-song teaser of Confetti on their BandCamp profile back in May, which includes the L7-like title track (AKA “Confetti In Your Fucking Face”), and also bowed a wild (Just check out that ending!) video for it which was directed by Dominar Films. The main idea behind the song is about wanting to emotionally explode, but holding back the inner turmoil by imagining throwing confetti in someone’s face instead of hurling verbal abuse. This concept aptly captures the spirit of the whole 9-song album, which blends aggression, exasperation, and frustration, with conviction, invigoration, and purgation.

The sound of Confetti is seriously ferocious from the get-go, as the band rips through the driving album-starter “I’m Fucking Dick Dale”. Distorted guitar riffs and low-end bass grind through the slammed, primal drum beat and cymbal smash while Erica directly intones the short-phrase, raw lyrics “When I hit you / You won’t know what to do.” Erica’s vocals rise in intensity as she unleashes the same lyrics cycle in an exclamatory tone amid the drum rhythm acceleration and thick guitar fuzz. In keeping with the song title, a brief line of reverb guitar reels out near the end of the tune.

The sludgy sonic onslaught doesn’t stop as “Methwitches” kicks into high gear with a propulsive bass line and drum bash. With a droning guitar line behind her, Erica adopts a lighter vocal tone, sing-talking in a dreamy, hypnotic register “Tell me, have they threatened you? / Tell me who they are…” Discordant guitar distortion reverberates through the dangerously anarchic thrills of “Wild Cherry Nightmare”. Erica menacingly stalks through the stark ‘steal and destroy’ coda of “…the great escape / With our guns ablaze / we’re gonna lay down waste.” A quick breakdown of kinetic drum beats and keen guitar jags escalates to a scorching boil as Erica shouts out “What we steal is what we get.”

The band detunes it even more on “I Want The F”, a noisy, heavy number that ups the chaotic attack factor while inserting short, but vivid-imagery lyrics like “Let them eat cake”, “guillotine death”, and “in a pretty dress” that conjure up Marie-Antoinette’s unfortunate fate. The vocal salvos segue into a tense simmer of a quick-picked guitar line and speedy marching drumbeat. The drums disappear and leave only the deceleration of the guitar pace before the clangorous stew returns. Atonal guitar scariness haunts the start of “Carl Sagan’s Ghost” until a galloping beat comes in along with thrashed out guitars and a charging bass line. A dispassionate Erica packs in a bunch of questions about the uncertain workings of the cosmos and the dichotomy between science and faith (Can fact and belief coexist?) in only a few spare phrases. While her tone may be detached, she does connect with the hopeful line “Somewhere something incredible is waiting to be known.”

Bad vibes radiate lyrics-wise from “Good Time” as Erica goes in lean ‘n’ mean, reciting cold-bloodedly “We come in through your window at night… / Switchblade in hand / searching for a sign of life.” A foreboding, low-slung bass line and rapid fire drum beat rampage through the tune as Erica delivers the kicker line that begins with “You don’t need to have a brain / to have a good time.” A repetitive guitar riff commences the slow-churning trudge of “Nobody Leaves This Place Without Singin’ The Blues” before distorted guitar fuzz and a pronounced drum beat make their mark. Erica pulls out her words deliberately, stating blearily “You don’t know where the night will go / You can’t hide…” while broiling guitar lines, dynamic drums, and scintillating cymbals hits support her. She encapsulates modern nightlife in a nutshell by declaring “This is how we disconnect.” Album-ender “ZANG” turns that downer thought around 180 degrees with a jittery squall of agitated sonics that includes zig-zagging guitar riffs, a super-kinetic drumbeat, and a defiant Erica proclaiming “I don’t need your advice.”