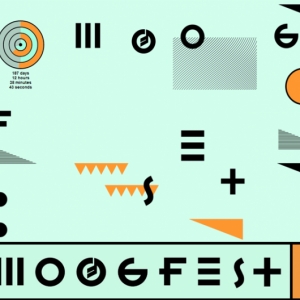 Along with inviting some of the world’s preeminent thought leaders to participate in the daytime conference, including multimedia artist Laurie Anderson, disco pioneer Giorgio Moroder, film composer Cliff Martinez, and instrument pioneer Roger Linn, among others, Moogfest 2014 invites Moog-inspired record labels and the music industry’s most respected taste makers to curate their own music showcases.

Emmy Parker, Brand Director, Moog Music Inc. & Moogfest tells Billboard Biz, “These companies nurture brilliant artists that we are lucky enough to build instruments for. Our respect for them runs deep, they are experts in their niche of electronic music and we are excited that they will be bringing their unique perspectives to stages at Moogfest. We’re crafting an event that celebrates the innovative spirit of Bob Moog: different modes of thinking, new ideas and technology, and intensely diverse music. These are the right group of creative curators to make that happen on the music side.“

Ghostly International’s founder Sam Valenti recognizes that “The Moog history and legacy has been about the future while maintaining the craftsmanship of the past.” RVNG INTL’s Matt Werth adds, “Moog has undeniably shaped the sound of electronic and experimental music since its introduction. Whether implemented in the work of the younger generation of artists on RVNG via vintage/ updated machines and soft synths or test driven by the older generation; the Moog remains an inspiration and catalyst for forward sounds.”

Furthermore, Warp Records’ North American Label Manager, Josh Berman explains, “Moog pioneered the world of analog synths and brought that technology into the home studio, the sound of a Moog can be heard throughout the history of our recordings.” He adds, “We experienced firsthand the great company and amazing people at Moogfest when Brian Eno, Flying Lotus and Battles performed. When we were approached to help curate, it was a no brainer to get involved.” Matthew Morgan, Co-Founder of AFROPUNK agrees, “Robert Moog and his synthesizers have been consistent cultural drivers, taking art, music and technology (and hence, society) forward. AFROPUNK shares such values and aspirations.”

While Fool’s Gold Co-Founder/DJ/Producer, Nick Catchdubs points out, “We love working with artists and brands who share the Fool’s Gold ethos to innovate and (more importantly) have fun while doing so. Moog is a legendary company that’s stayed DIY all these years, and you can tell their events are put together with real love and care. It’s already been a lot of fun starting the process of planning our showcase.” Sam Fotias, Director of Operations for Paxahau who are curating Movement Detroit’s showcase in addition to booking Moogfest’s nighttime lineup confirms, “The passion that the Moog team has for their product and company are principles that are extremely significant within our own company.”

Other curators include label No.19, who has become an internationally recognized beacon for quality underground electronic music after playing unforgettable ‘Social Experiment’ parties at events such as Sonar, BPM Festival and Fabric, London, along with No. 19 Music’s latest album series, Social Experiment 003 – a compilation by legendary techno/house progenitors of the ultra-deep variety, Art Department. Also joining are Crew Love, the collaborative concept of three record labels – Wolf + Lamb, Soul Clap, and Double Standard – known for their devotion to music that challenges the mind, moves the heart, and sways the hips. Add onto that, Moogfest’s neighboring Hopscotch Festival, and Austin’s Favorite Synth Shop, Switched On, which goes beyond the scope of the typical musical instrument store including education, making it a go-to shop for both promising and prominent artists such as Trent Reznor and Vincent Gallo.

Music showcases will be part of the nighttime programming that will feature diverse, landmark musical performances by new trailblazers, early pioneers of electronic music, and major headliners in over ten venues across the city of Asheville, NC. Headliners will be announced later this month.
Warp Records

Since its birth as a shop and record label in Sheffield, UK in 1989, Warp has become one of the world’s most respected and loved electronic and experimental dance labels. It is notable for discovering some of the more enduring artists in electronic music. Running parallel to the music is an equally strong visual identity, famously established through partnerships with graphic design iconoclasts The Designer’s Republic and video auteur Chris Cunningham, placing Warp alongside legendary labels such as Factory in electronic music history.
DFA Records

DFA Records is an independent record label and production team, launched in September 2001 by Mo’ Wax co-founder Tim Goldsworthy, and LCD Soundsystem’s James Murphy. The influence of musicians and bands like Brian Eno, Talking Heads,Liquid Liquid, Blondie and New Order can be heard throughout the DFA catalog. Rather than retread, however, DFA have taken the live dance music of the time and infused the techniques and themes with a modern aesthetic—alternately faster, heavier, dubbier, noisier, and generally more intense than their influences.
Fool’s Gold

Founded in 2007 by DJs A-Trak and Nick Catchdubs, this Brooklyn based label established itself with a non-stop series of releases bridging hip-hop and electronic music. With a clever and constantly evolving aesthetic for all Fool’s Gold visuals and merchandise, they have become more than an independent music powerhouse, but a trendsetting lifestyle brand with a flagship retail store in New York, and Fool’s Gold Clubhouse stages at festivals around the world.
Ghostly

Ghostly International is a multi-platform cultural curator, a tightly knit aesthetic universe fulfilling the roles of art gallery, design house, clothing designer, technology innovator, music-publishing company—and, yes, record label—in one. In the years since its birth in 1999, Ghostly has grown from a boutique label known for its experimental-pop and -techno acumen to an internationally recognized platform for the work of the world’s best visual artists, designers, technologists, and musicians.
No. 19 Music

The Toronto based record label and events company created and run by DJ / Producers Jonny White and Nitin. The No.19 brand/concept was created based on ideas expressed in article No.19 of the declaration of human rights – “Freedom of Expression”. These are “promoting the search for truth, enhancing social and political participation, and enabling self-fulfillment and self-expression.” Alongside the No.19 label, their events brand, Social Experiment is hosted the world over by renowned venues and major global festivals. In five short years No.19 has established itself as a breding ground, responsible for breaking some of today’s most pioneering and forward thinking artists.
RVNG Intl.

Driftless Recordings is a record label by Joel Ford and Patrick McDermott. The roster is diverse. It’s less about tracing sonic similarities, and more about taking each project as a patchwork view of everyday life, through each artist’s idiosyncratic, often psychedelic vision. Driftless is not a pop label or an experimental label, but a label that unites a diverse cross-section of artists who are using music and field recordings and a general obsession with sound as a way of understanding the weird world they inhabit.
Crew Love

Floating on a wave of unending passion and creative energy, Crew Love is a collaborative concept from Wolf + Lamb, Soul Clap, and Double Standard, three record labels known for their devotion to music that challenges the mind, moves the heart, and sways the hips. Unhindered by set-times or velvet ropes – Crew Love is a deep experience of music and movement. Ever-changing live acts accompany spontaneous and unpredictable DJ sets, R&B crooning blends into deep house, fist-pumping gives way to slow-dancing, lusts are satisfied, friendships made.
AFROPUNK

AFROPUNK is an emerging and influential community of young, gifted people of all backgrounds who speak through music and culture. Once seen as outsiders, they now directly affect pop culture worldwide. While the two-day AFROPUNK festival in Brooklyn is a well-known annual showcase, AFROPUNK is a year-round endeavor, staging live events, producing films and media, as well as hosting a website and a message-board that actively engages a global community.
Movement Electronic Music Festival

Celebrating its fifth anniversary in September 2014, Hopscotch Music Festival in Raleigh, NC has cemented its reputation with adventurous bookings that pair local North Carolina talent with notable national and international acts. Recognized for a fan-friendly, closely knit downtown footprint and thoughtful programming, Hopscotch continues to thrive on the belief that art should be experienced in an environment that suits the artist.
Switched On

Switched On is a synthesizer dream space, storefront, repair spa, and online retailer of music electronics. Founded in 2010 in Austin, Texas, the Switched On storefront has become an international destination for musicians, producers, sound designers, and creatives alike. They are attracted to the store’s ever-rotating selection of vintage audio devices and innovative new instruments. Switched On aims to create a better model of how a musical instrument store can impact and enrich a community of talents, worldwide.