Individual Day Tickets Are Now On Sale and Grant Access To Both Day and Night Programming.

Moogfest, the five-day festival dedicated to the synthesis of technology, art, science and music, which Mashable calls “No Ordinary Festival“, is six weeks away and today announces the daily schedule plus single day passes. Since its inception in 2004, Moogfest has been a magnet for artists, engineers, and enthusiasts of Dr. Robert Moog and his legacy to meet, share, create and collaborate. With an experimental lineup of daytime conference programming featuring cultural, artistic and technological luminaries and punctuated by a line up of diverse landmark nightly performances, Moogfest honors the creativity and inventiveness of Bob Moog and pays tribute to the legacy of the analog synthesizer.

By Day – Five days of mind-expanding conversation, experimentation, and collaboration for creative and technology professionals across seven venues in downtown Asheville. The conference is guided by the world’s preeminent thought leaders and pioneers of music and technology, including Simpsons and Futurama’s David X. Cohen; the ArchAndroid herself, Janelle Monae; improvised performances by Yeah Yeah Yeah’s Nick Zinner, Bradford Cox, and Dan Deacon; and Google’s brightest minds exploring the future of audio; plus conversations with interdisciplinary research laboratory MIT Media Labs; MAKE Magazine’s Mark Fraunfelder; OMNI Reboot, a magazine at the intersection of science, technology, art, culture, design, and metaphysics; videogame arts and culture publication Kill Screen; and more presenting one of a kind programming exclusive to Moogfest.

Moogfest’s free Modular Marketplace is an electronic pop-up shop showcasing the latest and greatest from a lineup of innovative instrument makers. Boutique electronics, experimental effects and modern modular synthesizers will create an interactive exhibition in which the public can engage with new musical devices and their designers.

The Modular Marketplace will host daily demonstrations, workshops and sound experiments from the engineers that are shaping the sounds of tomorrow, as well as a free week-long clinic on electronic music production. Programming includes presentations by The Pioneers of Electronic Music Instruments: Roger Linn, Tom Oberheim, Don Buchla, David Borden, and Dave Smith. 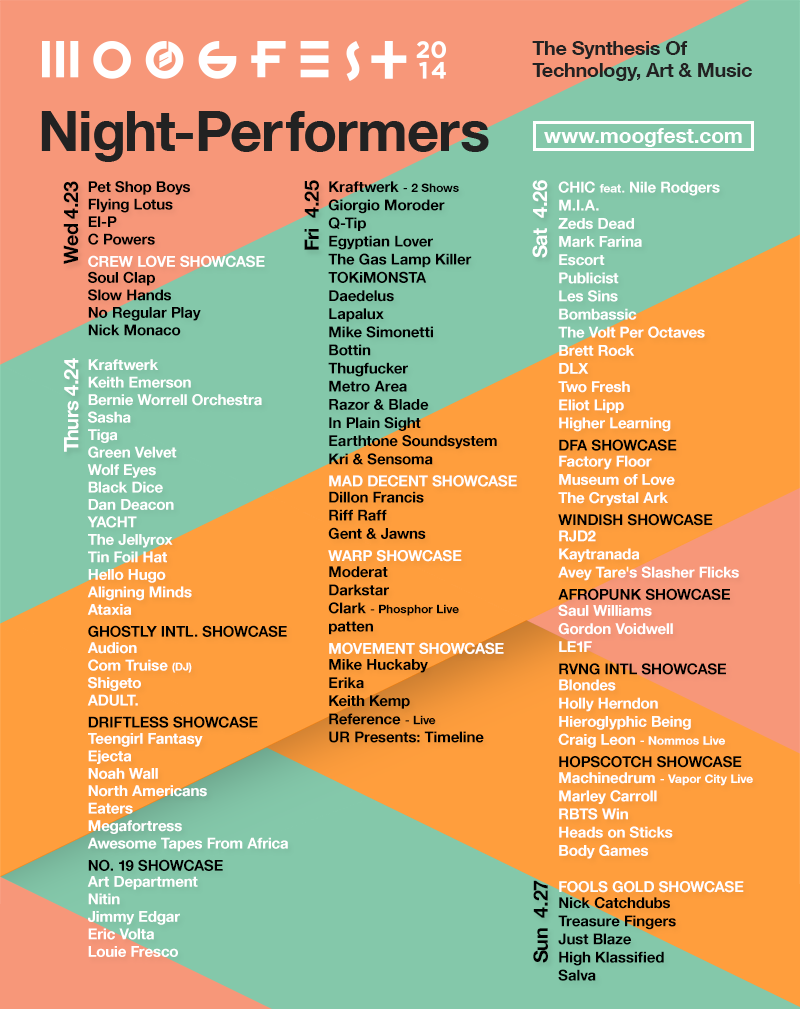