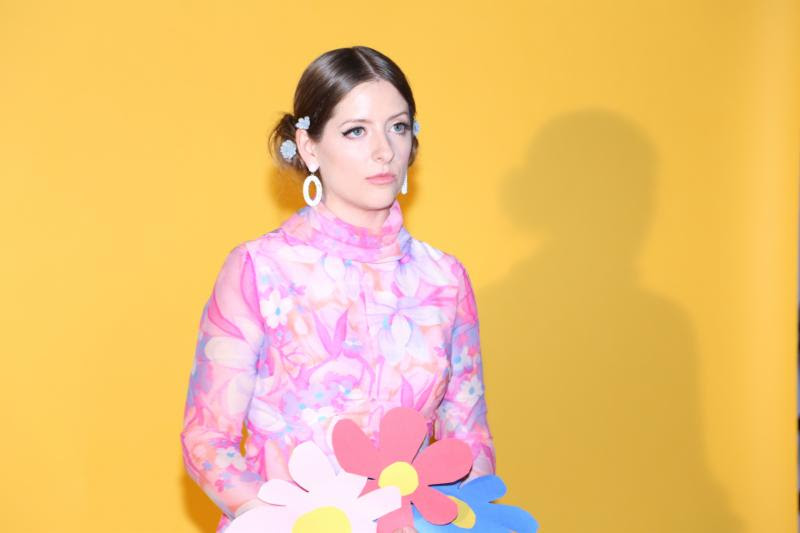 Molly Burch has released a new video for “Candy,” the new single is off her Full-length First Flower.
The video was shot on 8mm film by director, songwriter and actress Nöel Wells (perhaps best known for her role in season one of Master Of None / Saturday Night Live). First Flower is now available via Captured Tracks.

Molly Burch on the video for “Candy”

“I’ve been a huge fan of Noël’s for quite some time so it was a dream of mine for her to direct this video. It’s really inspiring to watch her work. Her mind is so fast and full of ideas constantly. The whole day was mostly female dominated, which is always my preference (shout out to my sister Samy Burch who cast all of the wonderful actors in the video!) It was a glorious experience collaborating and I feel she captured the song so well.”

“I was a big fan of Molly’s first album and so I was really excited when she asked me to direct a music video for “Candy.” The song itself is very visual to me, and my first instinct it that I wanted the video to be bright and colorful and fun…I also had this instinct where I wanted to make Molly look really great, I think she’s so beautiful and it made me excited to play with that, and there was a part of me that thought “as a woman why would I want to make her look so hot, isn’t that objectifying her?” And then realized the female gaze is completely different, if anything it’s a celebration and appreciation, there’s a safety in expressing that beauty. But that notion of exploiting something beautiful paired with the lyrics, which are all about trying to escape personal anxieties, came the idea of this girl at photoshoot, literally dressed like a flower child, kind of coming to terms she doesn’t want to be this photographic prop, but every time she changes how she looks and tries to escape, she gets caught again. We shot on 8mm to capture a 60s pop vibe, and to add to the levity of the silent film nature of the video, especially toward the end.”

New album First Flower, the follow up to Burch’s acclaimed debut “Please Be Mine”, is a bright, beautiful album peppered with moments of triumph. The voice is as strong and dexterous as ever, displaying her incredible range and professionalism as a vocalist. Burch has just begun her EU tour and heads to the UK in December in support of the record. Check below for list of dates.