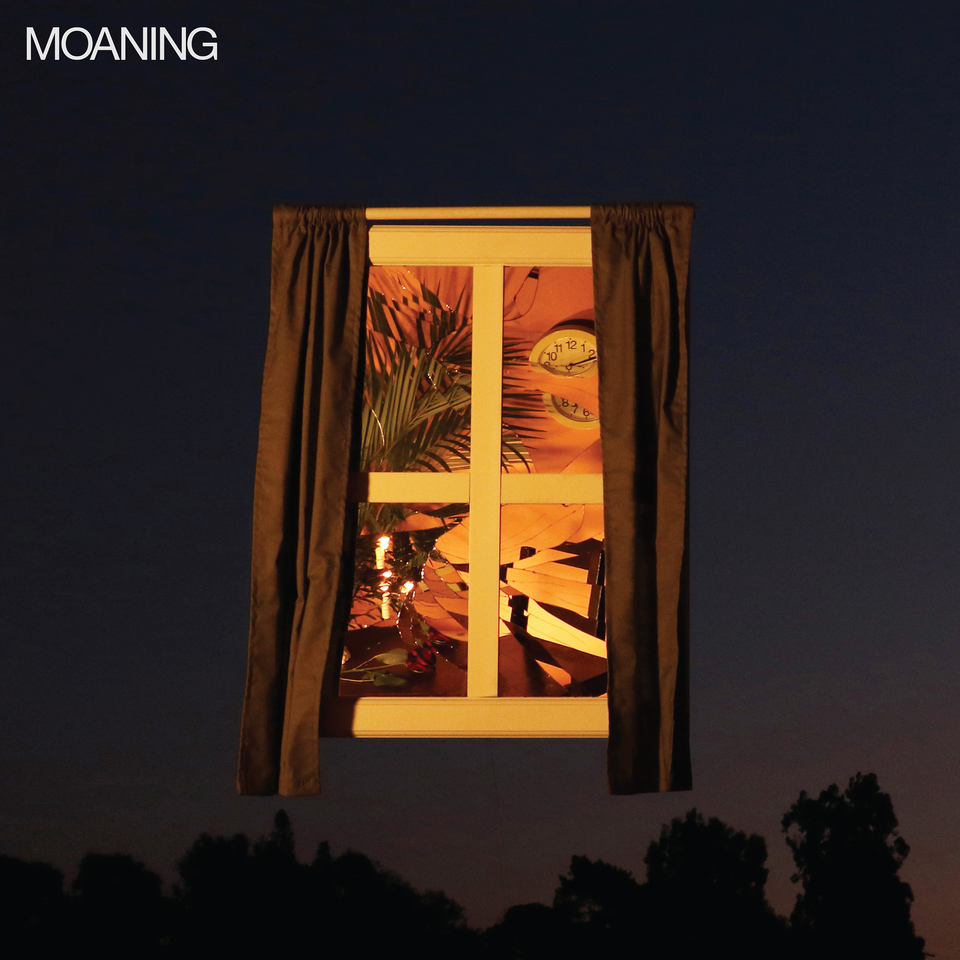 With their band moniker and abrasive yet ethereal post-punk aesthetic, Moaning emit an intriguing dichotomy; a moan can be something pleasurable but it’s also anchored to pain, whereas the LA trio blur the lines between punk fury and the celestial. Where these disparate factors coalesce, Moaning and their eponymous debut thrives.

It’s appropriate that the first song the band created, ‘Don’t Go’, kicks off the album sounding like a halfway house between expansive shoegaze and the mechanical post-punk of Joy Division – this is where you’ll find mangled riffs intertwined with rubbery bass and taut, danceable drumbeats. While the controlled chaos of ‘Don’t Go’ revs and roars with a machine-driven malice, vocalist/Guitarist Sean Solomon remains calm and almost despondent in his vocal delivery, as if unaffected by the searing maelstrom that circles around him.
‘Don’t Go’s metal on metal rigidness permeates the rest of ‘Moaning’ with ‘Artificial’ taking on a broader sound but with the same intense punk clatter at its core. It’s here where the album’s introspective lyrics wriggle into view “who is it for/was it thought through/can I have more/is it all for you/who is it for/will learn to share/nothing is far”. Pendulum swinging quiet/loud/quiet dynamics frame ‘Does It Work For You’ with belching balls of noise evaporating into nothingness and then back again throughout the track’s sub four- minute lifespan. A taut intensity powers ‘The Same’, with Pascal Stevenson’s bass and Andrew MacKelvie’s drums creating an awkward jerky foundation for Solomon’s serrated guitar lines. “We will be torn apart/don’t let me break your heart” slurs Solomon – a fitting set of sinister lyrics to match Moaning’s sonic malevolence.

When Moaning ease their foot off the post-punk gas, the likes of ‘Tired’ and ‘Close’ jut out as a juxtaposition to the reigned in melee found elsewhere on the trio’s debut. The former is a dreamy, synth track that gradually builds into a colossal wall of sound. Solomon can be heard uttering “what do you say/that carries any weight” as if to highlight a feeling of helplessness. While the latter finds a middle ground between the celestial and the acerbic with vapour-like synth patterns rubbing up against fuzzy guitar wails. Then there’s ‘For Now’ which sounds like all of ‘Moaning’ squished into under two and a half minutes; a tug of war between untamed noise and the serene.

‘Moaning’ is the sound of three individuals feeling their way through these uncertain times with an album that’s kept on a short leash.