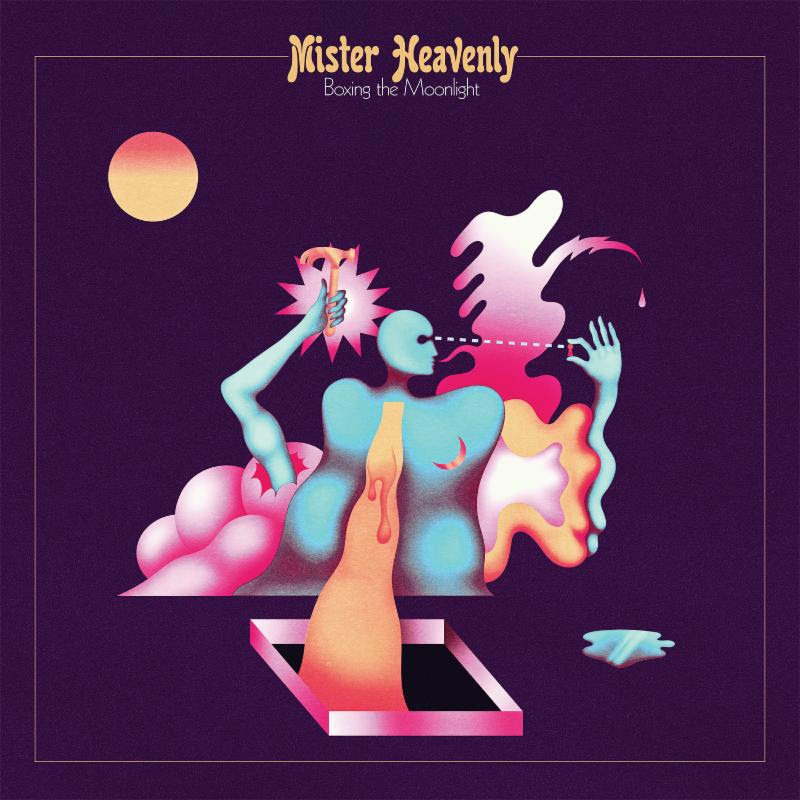 Supergroup releases are always a fascinating listen, the question however is whether or not they can be more than a gimmick. For their sophomore release, Mister Heavenly craft a clear sound that pulls listeners into dark nights lit by neon and the moon itself, making for a cohesive record on the whole. On the whole the songs and their delivery is so upbeat that it’s hard to find something to dislike. Somewhat predictable writing however will leave listeners hoping for a little bit more from the group’s next release.

Swinging with a light piano heft, “Beat Down” almost sounds like a strange theatrical pop track before its guitars come roaring out the gate. As the drums thud and shrieking really starts to take over though it turns into a fast and righteous rock track that outdoes what you’d expect. Taking notes from Future Islands and Mobile, “Blue Lines” shifts from bar-branded slow jamming to a shredding electric rush of energy. The band’s seamless ability to channel both these moods without ever losing the spirit of either is more than impressive.

“Makin’ Excuses” shifts over to an island infused electronic track that feels about as soothing as it is dance-ready. While it does feel vocally similar to a lot of other indie-rock tracks, it’s unique sound and energy lifts it above that. Pounding drums that emulate Def Leppard open up the dark blues of “Hammer Drop” as they ride the catchy riffs with cool harmonies. Floating their more dissonant guitar lines through the background of the track, they craft a track that’s parts subtle and brash in a wonderful mix.

Bubbling electronic synth notes that would fit perfectly in a film like Drive, “George’s Garden” is startling in its control as it plays a moody instrumental for over two minutes. While just as exciting in its pop throughout the latter half of the track, it almost feels like it would work even better as a two-part track rather than one lengthy blend. Through hilariously confusing lyrics, “No Floor” tells the story of what sound like a party gone wrong. While a tad generic party-rock, the band’s energy and charisma once again saves it.

“Magic Is Gone” takes tones of 70s neon pop in its cool tones as the vocals get smoky and deep, trying to seduce the listeners. Despite its great sound and fun delivery, the rest of the track doesn’t quite push the writing to anywhere as exciting as the aesthetic. Rushing with a clipping organ line, “Pink Cloud Compression” is as aggressive as the album gets, shredding with a sense of real raw hunger. As the chorus booms however it does feel like some of the later Vaccines music, but just missing something that makes it really pop right.

Sliding its hooks in like cream, “Crazy Love, Vol. III” is a methodical groove that rides its bass cleverly. Slow building in shimmering guitars while its vocals reach for the skies, its decision to sink into the sound and explore it makes the track work. Like Elvis Costello on PCP, “Dead Duck” really grinds out its goofy pop organs to the max. Screaming and hitting every moment of the track with a unabashed fury, they liven up the older tones something punk. “Out Of Time” closes the album with a brooding drum beat and a mantra that really creeps through the song for something that’s infectious yet deeply unnerving.