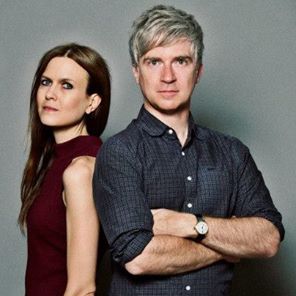 Minor Alps, the collaborative vision of Juliana Hatfield and Nada Surf’s Matthew Caws, have unveiled “Far From The Roses”, the latest song off the duo’s forthcoming album Get There, out October 29th on Barsuk Records. This November the pair will embark upon a string of tour dates in support of the release, kicking off in Seattle at the Barsuk Records 15th Anniversary Show. Upcoming dates for Minor Alps are listed below.

Over the last two decades, both Caws and Hatfield have carved out long-lasting – and strikingly independent – careers within a dependably fickle music business, Caws with his now 20-year-old New York City group Nada Surf, and Hatfield with the Boston-reared Blake Babies, the Juliana Hatfield Three, Some Girls, as well as a number of releases under her own name.

Hatfield and Caws not only share lead vocals and co-writing credit on each of the eleven songs that comprise Get There; aside from some drumming and programming by Parker Kindred (Jeff Buckley, Antony and the Johnsons) and Chris Egan (Solange, Computer Magic), the pair plays every instrument and conjures every sound – from primitive electronic dub pulse (‘Buried Plans’)– to straight-up rock hook (‘I Don’t Know What To Do With My Hands’) to stripped-down electric guitar punch (‘Mixed Feelings’) to eerie trance-allure (‘Radio Static’) to hypnotic guitar drone (‘Waiting For You’).