Mick Jenkins ‘Live in Vancouver, BC.’ 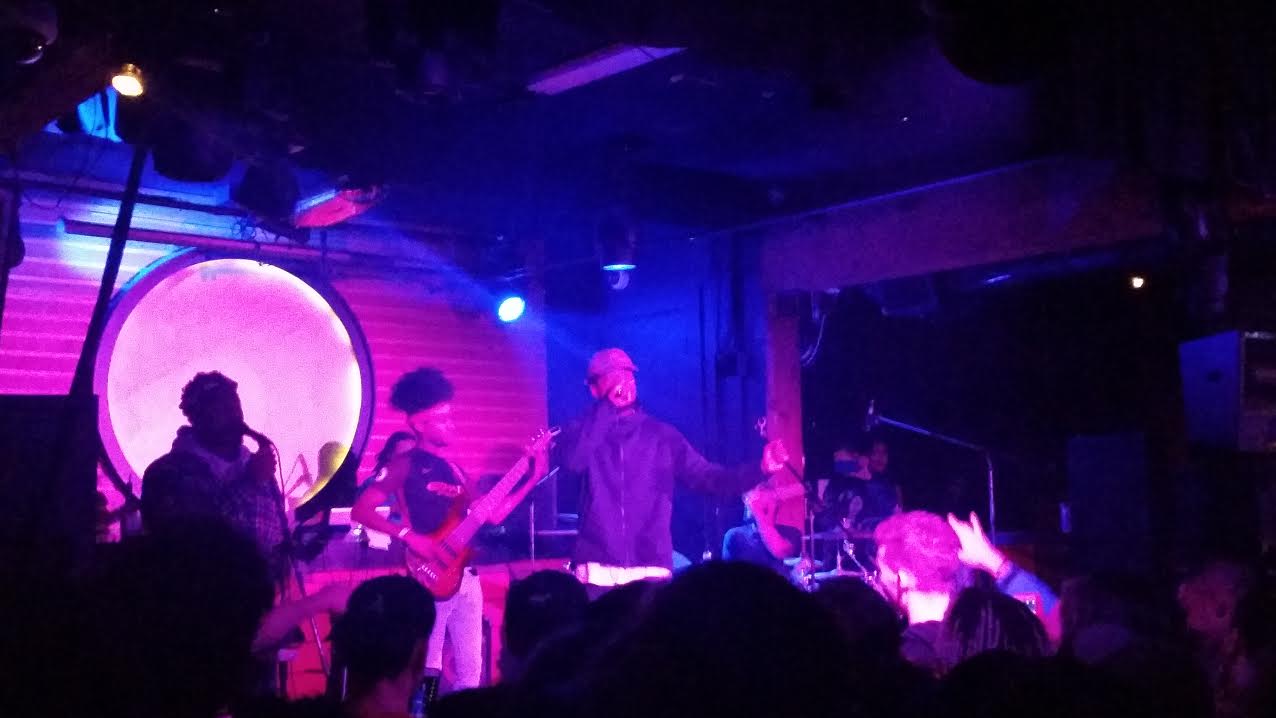 Mick Jenkins live in Vancouver, BC photo by Leslie Chu
Share on TwitterShare on PinterestShare on PocketShare on RedditShare on FacebookShare on Email

Chicago rapper Mick Jenkins had a rocky start to his Pieces of a Man tour, which kicked off at the sold-out Fortune Sound Club last night (January 5). Doors opened at 7:45 pm, half an hour before Vancouver’s Holy Sock Gang were scheduled to open. Fans don’t often get to see a headliner soundcheck before the first act, but there Jenkins and his live band were, checking their levels.

Holy Sock Gang are a collective of rappers, producers, videographers, photographers, and more. They have no official lineup. Instead, they credit their members on a project-by-project basis. At Fortune, they consisted of one DJ and as many as four emcees onstage at a time. Blink and there was a new face; rappers flew onstage from every direction. Unintentional amounts of feedback couldn’t stall their momentum as they skipped from trap to old school hip hop beats, over some unintentional amounts of feedback.

Next was Stock Marley, or jSTOCK, who, along with Jenkins, is a member of another hip hop collective, Free Nation. Marley brought music with a message, music for fighters, survivors, and dreamers who had to overcome something at some point in their lives. With a booming voice, he projected his inspirational messages to every corner of the club, which was full by this time. He was a force to be reckoned with, emphatic and uplifting.

Disappointingly, with no explanation from the venue, promoter, or artist herself, Little Rock, Arkansas singer/rapper Kari Faux was M.I.A. At most, one can assume she was removed from the bill due to time constraints.

Bringing the night full circle from soundcheck to performance, Mick Jenkins and his band – a drummer, a bassist, a DJ, and a backup singer – finally hit the stage.

They got things rolling with “Stress Fracture” and “Plain Clothes”, but it was a song like “Ghost” that benefitted most from live instrumentation. The drums and bass made for a groove that wobbled with an almost rock energy that doesn’t come through with a backtrack alone. Same with “Reginald” and “Jazz.” On record, both songs are laidback, downbeat. But Jenkins and the band made those songs fiery and audacious live. Jenkins’ voice is liquid smoke. He can flow, but he’s not the smoothest rapper. Live, he added extra rasp to his rhymes on songs like those to match the band’s intensity.

For over an hour, fans bounced with Jenkins and chanted his mantras: “Drink more water,” they repeated between songs. “Spread love,” they encouraged in unison with Jenkins on the song of the same name, “Spread Love”.

theMIND, who provided backup vocals for Jenkins all night, got the spotlight for a solo slow jam, after which Jenkins and the rest of the band chimed back in with the disorienting “Earl Sweatshirt Type Beat”. Its percussion dripped like water in an underground cave. Compensating a bit for the delayed show schedule, Jenkins’ set ran 30 minutes past the advertised 10 pm curfew. With extra growl and gravel in his voice, he closed with “Jerome”.

“Put your motherfuckin’ hands in the air, and wave them like you just don’t care,” he commanded. But above all else, as always, drink more water and spread love.