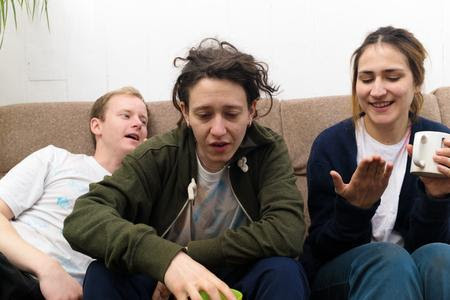 Micachu & The Shapes have announced Good Sad Happy Bad, their forthcoming full-length, out September 11th via Rough Trade Records. The band has also shared the first single “Oh Baby,” which is now available for streaming. Micachu & The Shapes will play East Coast shows in September, including a stop at Pop Montreal, marking their first time here in three years. Tickets will go on sale this Friday A full tour will follow later this fall.

Three years after the release of their last record, Micachu & The Shapes’ return is almost an accident: the trio of friends decided to rehearse in an East London studio and found themselves immersed into an hours-long jam. Drummer Marc Pell had an Edirol field recorder in hand, and unbeknownst to his bandmates, recorded the whole session; Bell, Mica Levi, and Raisa Khan were so enamored of those off-the-cuff audio experiments that they became THE beginnings of a new record.

The band worked out the final mixes together over a number of months – rather than in a traditional, multi-track studio over a shorter period – Pell found a new degree of creativity. “I think the best drum part I have ever written is the stick-clicking at the beginning of ‘Peach’ – a moment, he explains, that he wouldn’t have been able to notice without the luxury of seeing the recorded tracks as more than simply songs, but as collections of sonic ideas.