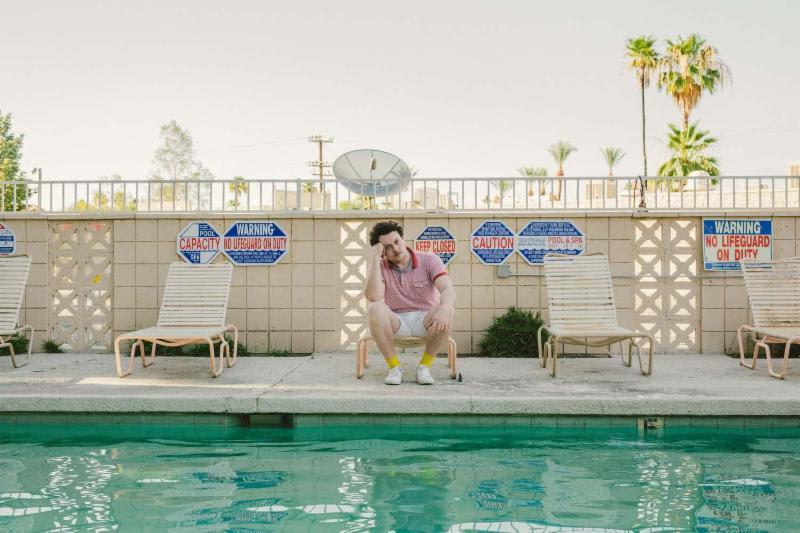 Metronomy’s Joe Mount has released a new video for the single “Night Owl,” directed by Quentin Dupieux AKA: filmmaker and musician Mr. Oizo. The track is off Metronomy’s Summer 08.

Filmed in the Palm Desert in Palm Springs, Mr. Oizo’s mysterious video follows Mount and his girlfriend (played by cult film director Zoe Cassavetes) on a bizarre road trip. Despite the sun-kissed setting, it’s a journey plagued by the macabre as Mount suffers a series of brutal murders, while the movements of an unexplained human brain and an ominous grim reaper track the couple’s adventures. It’s a video that echoes the surreal imagery and dark humor that made Mr. Oizo’s 2010 feature-length indie film ‘Rubber’ so memorable.

‘Night Owl’ represents the first time that Mr. Oizo has directed a video for another artist since he filmed Sebastien Tellier’s ‘La Ritournelle’ back in 2005. He accepted Mount’s offer to direct the video simply because his loved the track so much.

“I’m not saying I’m a master, but this video is a masterpiece,” says Mr. Oizo.

“Working with Mr Oizo taught me a lot about humility”, adds Mount.

“Night Owl” is the most immediate of the Summer 08 singles to date. It pulsates with a disco-groove – at once laidback, then nervously on edge – that captures the ambience of a downbeat soul lost in London’s nocturnal summer swelter. It’s a track that echoes the sleek, sophisticated pop of Phoenix circa Wolfgang Amadeus Mozart with the 80s style of OMD and the driving bass that underlines Future Islands.

Entirely written, played and produced by Mount himself, Summer 08 finds the multi-instrumentalist reflecting on his experiences around the time that Metronomy first landed a major breakthrough with the Nights Out album – the guilt at spending key moments in loved ones’ lives in the back of a tour bus, and the confused mania of finding himself a critical darling.

It’s the album’s duet with Swedish superstar Robyn, ‘Hang Me Out To Dry’, mixed by Erol Alkan, that’s the songwriter’s favorite though. An early draft of the track was recorded for The English Riviera but it has only now realized its full potential. In fact, many of the tracks have emerged from demos and loops that date back to the late 2000s era. It’s an album that reiterates why influential fans such as Kanye West, Tyler The Creator, Lady Gaga, Daft Punk and Josh Homme have all fallen under Metronomy’s spell.