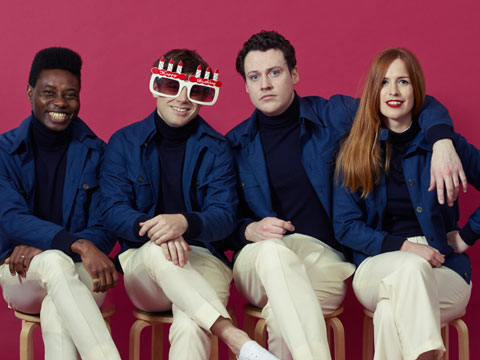 Metronomy will release their new album Summer 08 on July 1st on Because Music. The LP’s first single ‘Old Skool’ is a cowbell-clattered cocaine pop belter that glimpses ’00s London from the backseat of an Addison Lee. It descends into a chaotic scratch frenzy courtesy of Beastie Boys’ turntablist and Joe Mount’s childhood hero Mix Master Mike. The accompanying video directed by Dawn Shadforth features Catastrophe’s Sharon Horgan and Game of Thrones’ Ben Crompton in an explosion of ’70s aesthetic hedonism inspired in part by Mike Leigh’s ‘Abigail’s Party’.

Summer 08 finds the multi-instrumentalist reflecting on his experiences around the time that Metronomy first landed a major breakthrough with the Nights Out album – the guilt at spending key moments in loved ones’ lives in the back of a tour bus, and the confused mania of finding himself a critical darling.

“I had those other albums – and how I wanted to record in bigger studios – out of my system,” he explains. “I wanted to make another record with the naivety of ‘Nights Out’: ten tracks, straight up, upbeat. Write another banger, then another, and don’t really think about it.”

Mount’s aim for Summer 08 was to make a mature, eclectic pop record in the vein of classic works by OutKast, David Bowie and Daft Punk. Recorded in Black Box Studios in France with mixing courtesy of Bob Clearmountain (Bruce Springsteen, David Bowie) and Neal Pogue (OutKast), it’s the most daring and creative Metronomy album for a good reason – they won’t be touring it any time soon. “I want to have a break from touring but I don’t want a break from putting out music,” says Mount, noting that he wants to prioritise time with his two young children.

As for the lyrics? “I was living in East London in 2008 and felt like all this stuff was happening in the West end. It’s nonsense really, but I felt it was this privileged end of town, all the musicians there had wealthy parents and were living in Ladbroke Grove and Notting Hill. So that song’s about being totally idiotic and just jealous.”

It’s the album’s duet with Swedish superstar Robyn, ‘Hang Me Out To Dry’, mixed by Erol Alkan, that’s the songwriter’s favorite though. An early draft of the track was recorded for The English Riviera but it has only now realised its full potential.

Summer 08 will be released on digital, CD and vinyl (with CD included) formats as well as a Deluxe vinyl / CD boxset.