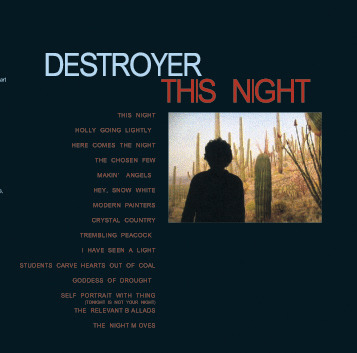 Record Store Day is Saturday, April 20, and Merge Records will be releasing limited Superchunk & Destroyer vinyl to celebrate. The only way to get your hands on them is to visit your local independent record store on April 20.

Superchunk – “Void” b/w “Faith” 7-inch Two brand-new Superchunk songs on coke-bottle clear vinyl, with art designed by Mac. This 7-inch features hand-numbered sleeves printed at Barefoot Press (the original printer of all the 7-inches Merge put out “back in the day”) and is limited to 1,000 copies worldwide. It’s only available at your local record store beginning April 20!

Mac shared the inspiration behind the single:
I was in high school when I first heard one of my favorite hardcore records, the split album on Dischord with the bands Faith and Void, two very different DC punk bands. It’s a favorite of a lot of people, I think. I love both sides but everyone always refers to it as “Faith/Void,” so I wanted to have a single called “Void/Faith” and set about to write those songs. Thematically the titles were already in the neighbourhood of where Superchunk’s next album was going anyway. The cover is even an abstracted homage to art on the Void side of the original. Musically we aren’t like either of those bands, but that era influences a lot of what we do. We recorded the single at Overdub Lane with Beau Sorenson and John Plymale, and it was mixed by Beau Sorenson.

Destroyer – This Night double-LP The 2002 Merge debut of Destroyer, remastered and available on vinyl for the first time in the US. This special pressing of This Night is limited to 2,000 copies worldwide and is a Record Store Day exclusive. Visit our SoundCloud page to stream two tracks from This Night.

When asked for his thoughts about the album, Dan Bejar responded:
Dear Customers,
For 10 years I’ve been telling people that This Night is my favorite of Destroyer’s nine LPs. I have not been lying. It’s got mystery and sass, lots of guitar playing in the style that I like, drumming that is so hard to capture you maybe had to be there. It is the first Destroyer album with full-on rock poetry of the kind I would chase deep into the 2000s, then abandon in this new corrupt decade. It is the first instance of me learning how to sing with my actual voice. We learned the songs fast and recorded them fast, but took our sweet time while playing them, which I think is a good mix. I turned 30 four days before the record hit the streets. But even before that, I knew This Night was doomed.