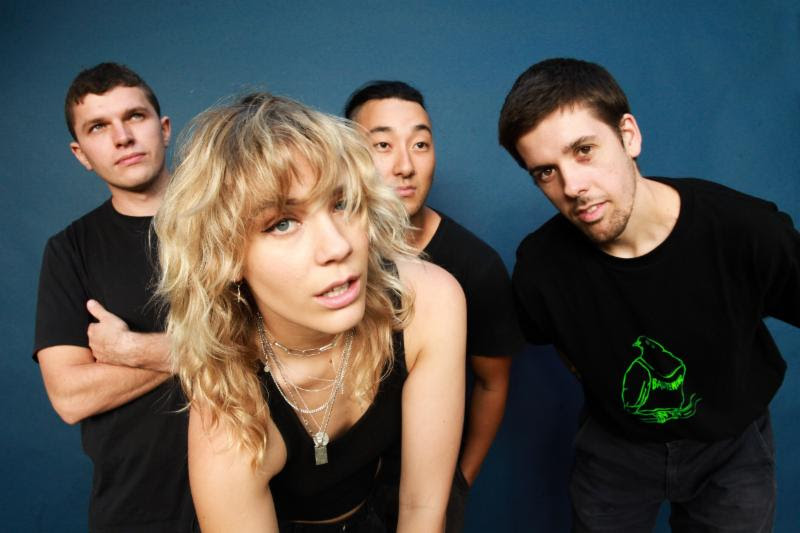 Most kids feel isolated growing up no matter if you are living in a big city or small town. Imagine growing up and actually being in a place that is super isolated from the rest of the world. Most kids turn to something to help them get by, art, writing or in the case of Annabel Liddell, music. Growing up in Auckland, New Zealand, the lead singer of the raucous Miss June turned to playing the guitar at the ripe age of 8. This set her on a journey exploring music and then starting to write her own songs. The band is set to release their debut album Bad Luck Party on September 6th via Frenchkiss records and we got to catch with Annabel as she prepares for life on the road over the next few months.

It’s 11 am in Auckland when Liddell answers the phone. “Sorry I’m just brushing my teeth,” she yells over speaker phone. “I was just listening to the smooth jazz on hold while waiting to connect. Brushing my teeth and listening to some smooth, smooth jazz,” She laughs. The very affable and charming front person grew up on a steady stream of music that her mother turned her on to, although it was very different from the kind she has been playing in with Miss June. “I grew up on the country and folk music that my mum listened to,” she says, “but that turned into me finding the darker corners of that genre.” By the darker corners of that music, Liddell explains that discovering bands like Townes Van Zandt and Waylon Jennings put her on through line that led to the raw, high energy songs that she crafts with the band. “Through Townes Van Zandt and Waylon Jennings I discovered the artists that they inspired like Elliott Smith and through that Nirvana and through them bands like Fugazi.” Besides being a big music lover, Liddell has always been a performer at heart as well. “On Fridays in elementary school my teachers used to let me perform the songs that I wrote for the rest of class,” she says with a chuckle.

Growing up in New Zealand was great for Liddell to immerse herself in her craft. She explains that even though Auckland is one of the larger cities in the country it still felt isolated. “It’s tiny here,” the musician says, “There’s this thing here where every single person has two degrees of separation from everyone else. That’s a bonus when playing music as you get to know promoters and musicians and venues really quickly.” Even though that is the case, Aukland is suffering what many other cities is experience with many of their music venues shutting down. “There’s so many venues closing at the moment it seems,” Liddell says, “There’s no real medium size rooms left over here. Just like the large 2000 capacity places and the real small venues.” Luckily for Miss June the band has graduated their local scene and has now started playing shows around the world.

“Going on tour and playing shows in America and Europe has been really, really fantastic,” she says and you can hear the joy in her voice. “I have family in the US and went there a bunch growing up and I lived in London for a brief time but playing in these different cities with the band has been a totally different thing. When we played in London, there was this moment when we all just kind of looked at each other and it was like “Oh yeah, we got this,” it was a great feeling.” With these cities that Miss June has been traveling to being so much larger than the one they are from, you would imagine there would be a big difference between the audiences they are playing to, but, it turns out that isn’t really the case. “No, not really,” Liddell explains, “The main thing being that in Auckland when people turn up at a gig it’s the thing that they have prepared to do that night. Elsewhere you’ll meet these people that just turn up at the show without knowing who the bands are just because it’s in their local bar or something which is cool. You get to play to a new group of people every night.”

With the release of Bad Luck Party on the horizon, Miss June should prepare to play to new people who will become new fans every night. The record is a blast from front to back. A blend of 90s grunge but shaped through the lens of a modern sensibility and featuring outstanding musicianship and Annabel’s honest, raw and powerful vocals. Before Miss June hits the road, Liddell wants to make sure she can enjoy her downtime. “When the record comes out we have some initial shows in New Zealand then Australia before moving on to Europe and then North America,” she explains. “Right now though I am at my mom’s house and just want to soak in as much sleep and relaxation as I can before this all starts.” This is a good thing because the band and the record is is good that they need to prepare to be on the road and playing to fans new and old for the foreseeable future.