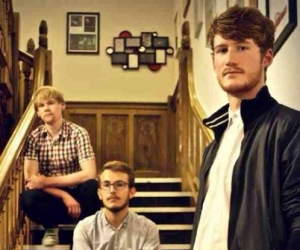 Following February’s release of ‘Ores & Minerals’, Mazes return with ‘Better Ghosts’, a mini-album that blurs the lines between ‘Ores & Minerals’. The ten track mini-album will be released on 11th November via FatCat Records on vinyl and digital download.

The band started to think about compiling such a collection in the time between touring ‘Ores & Minerals’ and beginning to compile songs and ideas for a third LP, as singer and guitarist Jack Cooper elaborates;

“The record would be built around things we’d collected along the way…songs off Ores that we’d changed live, new songs we’d honed on tour, covers, and field recordings. As we began formulating the plan a loose narrative began to appear or at least something slightly tangible. It’s a record about a year of touring and hanging out…where everything and nothing happened. Things between things. Listening to and being influenced by everything ever and then trying to ignore it.”

Indeed, Jack states that the intention was for the band to be “primarily influenced by themselves”, a pursuit aided in a roundabout fashion by touring behind ‘Ores & Minerals’. The tracks on that album were built around loops and samples and the three members of Mazes were rarely in the same room as each other when the tracks were recorded because, as Jack explains, the DIY nature of the sessions meant that “the rooms we recorded in were often too small for all three of us and often any of us at all.” When it came to playing the album live, some of the songs were too complicated and layered for the band to feel they could do justice to the recordings. The ones they played were often substantially different to the recorded versions, but, in interpreting them, Mazes hit upon a sound that could truly be called their own, gaining them a reputation as a taut and thrilling live act along the way.

In the early days of the band Jack would bring songs to practice fully formed and the group would struggle to play them because, as he admits he’d “never really consider the way Conan (Roberts) and Neil (Robinson) play. As it is now, they’re the biggest influence on Mazes songs; the way they play together… a sort of awkward metronome. ‘Hayfever Wristband’ is maybe the best example of that yet.” Conan constructed ‘Cicada’, and Jack sang a melody over it, a first for the band and a hint at a more collaborative future for Mazes as they continue to pursue a bold, singular vision for their recorded output.

Mazes are heading off on tour with Parquet Courts in October and Jack says that this year “seems to have been infiltrated by a lot of Texans”;

“My girlfriend lived there for a few years and knew Bradley Kerl, who painted the ‘Better Ghosts’ sleeve, from a food market he worked at. They became great friends and Bradley was in a band called Teenage Cool Kids with Andrew from Parquet Courts. We’re heading off on tour with them in October. ‘Donovan’, which ties the record together, as Bradley seemed to figure out, was written by another Texan; Isabel Martin and a band called Yellow Fever. Randomly, Isabel stumbled across us playing this pretty obscure song whilst she was on tour with another band in Brighton. She wrote down the correct lyrics for me and we’ve become firm friends. Completing the circle or rather pre-empting the circle, the week before that I’d seen the actual Donovan walking past Goodge Street tube which, if you’re a fan of him is fairly seismic. Seeing as the guy is a master of Transcendental Meditation and also fond of taking credit for things, I can’t help think he’s involved somehow.”

And why the title ‘Better Ghosts’? “It’s Conan’s explanation of Ghostbusters 2 being superior to Ghostbusters,” Jack explains, “It’s just something that we talk about a lot and it stuck.”

Currently on the road in Europe with Parquet Courts and on the brink of releasing their new mini-album, Better Ghosts on 11th November, Mazes have just confirmed a string of new UK dates next month:

^ with Parquet Courts % with Sebadoh