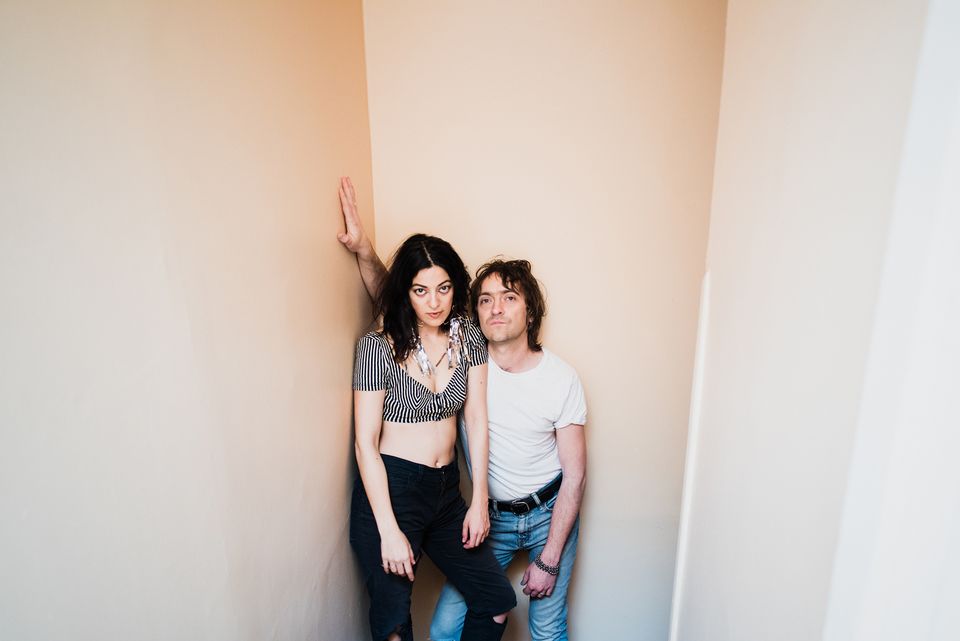 Sometimes making art is knowing how to capture moments as they come. For Mass Gothic, a lifetime of light collaboration between Jessica Zambri and Noel Heroux, turned Noel’s own project into a husband and wife dual-effort. We caught up with Zambri ahead of their new album I’ve Tortured You Long Enough to discuss this shift in working together and how natural their new writing process became.

Northern Transmissions: Though you’ve both supported and worked together in parts before, what made this new record feel like the time to start working together equally as a pair?

Jessica Zambri: We always worked on each other’s music, we never consciously avoided being more involved in one another’s music. We were just busy doing our own things. At some point it just became unavoidable, it was easier to do than not do really. The first Mass Gothic record was mostly Noel’s record, and I would do some writing and singing. After I’d done some of my solo work, we just found ourselves coming together more for a 50/50 process and it just felt like a natural step so we followed it.

NT: What were some of the most distinct differences you noticed by sharing writing duties?

JZ: I felt like I walked into the situation coming off of making music with my sister, so I was used to making music with a partner. Every person is different though. Noel and I had worked together a lot but we hadn’t made music together this wholly, and it really stood out that we had these different processes to making music. In the end we respected these different methods and found how to coexist with our own individuality. The music was the force of nature, and we kept at it as our main goal.

NT: While the album’s title seems to be a funny take on your marriage, how do you feel it reflects on your own self-doubt and not letting yourself fight your creative fears?

JZ: The title came before we even decided to tackle Mass Gothic as a duo. It popped into Noel’s mind and it just seemed like a cool album title, which I agreed with immediately. The title became a mantra when we started making music together, and of course it’s kind of humorous. You can do it to yourself and someone can do it to you. Depending on where we were with each song and the stories behind them, the emotion would change. It’s about facing fear and knowing it’s there.

NT: Why did you ditch your apartment and belongings going into the record and what did this freedom from things offer you?

JZ: There was so much freedom to it, I would really recommend doing it. We wanted to write and record a record, so we couldn’t afford to pay rent and be at home when we wanted to just make music, which is a lot about survival. We didn’t want distractions and we wanted this new piece of music to be the focal point of our lives. We took away everything that was comfortable, to find comfort in making music together. I don’t want to be in a safe emotional environment when I make something new, so I can avoid the traps of what comes with that.

NT: What made you guys decide to jump back in the studio to rerecord the album?

JZ: We’d gone out to L.A. and we’d mixed it, I was really proud of it and we liked it. Mass Gothic was asked to go on tour with Modest Mouse, and we knew it was going to be the biggest rooms we’d ever played. Then we realized if we went on tour we had no idea how to play the songs and we had no band. The minute we started rehearsals we realized it was so much more emotional with the band playing the songs. So we knew then we had to redo it. It was also pretty exciting because we knew so well that it was the right thing to do right then.

NT: How did “Dark Window” form out of late night singing and dancing around the studio?

JZ: We were just beginning to set up the studio and making an area to make music. It was late and we had drank some wine, and I was just really loving the January weather in California. I just started frolicking around while singing the melody, and then Noel picked up the guitar and we had the song. It came together so fast and naturally, it’s really special to me.