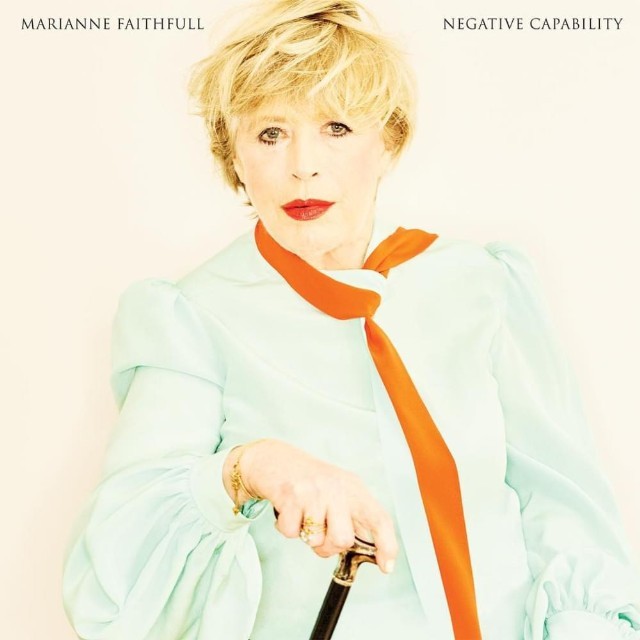 While she maintains a legacy as one of the great voices of our time, Marianne Faithfull has straddled original writing through the years. This echoes throughout her new record, and though her emotional delivery is stronger than ever, her ability to pull us beyond that is rarely as strong. In the end its the personal moments and fresh lenses on her familiar tracks that make this album stand out.

In the slow airy production of “Misunderstanding” there’s a deep sadness and a raw drive to Faithfull’s now raspy vocals that make the song so powerful. In her blatant and honest lyricism, Faithfull is able to cut through to listeners and shake the real intentions out of her subjects. While he usually commands attention, Nick Cave is overpowered by Faithfull on “The Gypsy Faerie Queen” as the two create a kind of sad sequel to “Straight To You.” Even with these notable similarities, the song becomes a deep and gripping listen. Though revisiting one of her most famous covers in “As Tears Go By” may come off as an attention grab, it carries a new kind of sadness as the passage of time gives new meaning to the song.

Faithfull pushes a more serious and caring tone on “In My Own Particular Way” though much of the production is a little to cliché to perfectly match the energy she gives to it. “Born To Live” however lets Faithfull guide the song, as she reflects on what she wants against the realities facing her. More than anything, it’s the poetry behind the song that make it really sing. It’s cool in this way to see such a textured recording in “Witches Song” as Faithfull exudes a sense of magic and cool in her folk drive. It’s the more subtle textures and evolving harmonies however that make it feel truly perfect for its subject matter.

“It’s All Over Now, Baby Blue” though very traditional folk-pop rings out with a real sense of authenticity, as she pulls you through a painful history. This said, it doesn’t always feel like a distinct experience enough to come back to often. Through “They Come At Night” there’s a sense of exploration to Faithfull’s writing that is lacking from the rest of the record, thought even the pounding drums of the Alt. Version don’t really feel revolutionary enough to be that stirring. At its stripped down beauty, “Don’t Go” is truly heartbreaking, and a song that really twists the soul as it goes. Just when you get used to it, the descending piano rolls hit so hard that it feels as though Faithfull is letting a lifetime of sorrow out on you without hiding anything.

She hits a similar weight in the bombing-inspired “No Moon In Paris” with a sense of horror baked between the lines. Detailed guitar runs and a growing urgency in her voice hits hard to make you think over how much has changed in the last two years. Though there’s definitely a personal edge to “Loneliest Person” it closes the record in a much more traditional fashion and rounds things out with less of the punchy writing that runs through Faithfull’s other tracks.