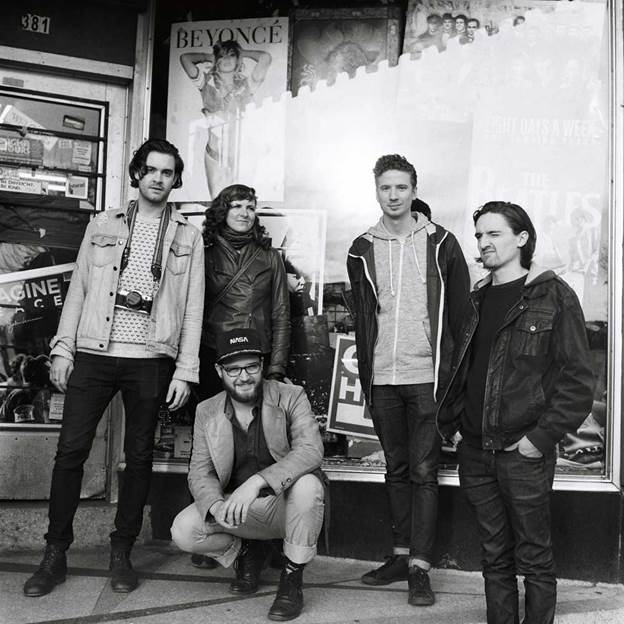 Major Love is the moniker of Canadian songwriter and multi-instrumentalist Colleen Brown and members of Scenic Route To Alaska, Jesse And The Dandelions, Elijah Abrams, and Aaron Goldstein. The resulting combination is a sound that thrives at the intersection between Brown’s resonant vocal expression and Scenic Route To Alaska’s swagger. From Edmonton, Alberta by way of Kingston, Ontario, they make soulful pop-rock music for their hoser friends.

The band has signed with Latent Recordings to release a new self-titled EP this week, March 9, and will release a full length album later this year. Two of the EP’s four tracks have already seen a lot of praise. ‘Tear It Down’ is currently in heavy rotation on CBC Radio 2, reaching #4 on the Radio 2 Top 20, while ‘Motherland’ – written essentially as a love-letter to Alberta – won a province wide songwriting contest through the ATB competition, to the tune of $10,000.

EP track, ‘So Good’ was written at a hostel in London while Brown was on tour in the UK. “I hope it doesn’t spoil the magic too much to simply say that I’d gone for a walk one morning, and lay down on the grass in a beautiful neighbourhood park in the early summer sun, basically counting my blessings to be touring overseas for the first time, playing music,” she says. “The whole thing was written in about 10 mins, in the hostel shower stall – it’s hard to find privacy in those places!”

The self-titled EP is the first under this new moniker, and was conceived in the lamplight of London’s Bedroom Bar during Brown’s first tour overseas. Fellow Edmontonians, Scenic Route To Alaska, were also wrapping their first tour in Germany and the UK. The two acts found themselves on the same dimly lit stage in Shoreditch, 7000 kms from their hometown, bonding over an appreciation of vintage Harmony guitars, singalong pop/rock anthems and an affinity for the spacious, soulful recordings released on the Stax and Motown labels in the 1960’s.

“I watched them play and knew right away that I wanted to work with them, and we got along gangbusters right from the get-go… it felt like synchronicity,” says Brown. “We went into the studio with our mutual friend and collaborator Jesse Northey (Jesse And The Dandelions) within a month of returning home, planning just to record one or two songs to test the waters. Things felt and sounded so amazing that we just tracked the whole EP there.”

Recorded live off the floor in Edmonton’s True North Studios with Northey on keys and faders, they were joined by multi-instrumentalist Elijah Abrams, with additional mixes and co-production by Toronto-based pedal steel guru Aaron Goldstein and Kenneth Meehan (Daniel Romano). The singalong track ‘So Good’ was mixed by Brooklyn’s prodigious hit-makers Gus van Go and Werner F.