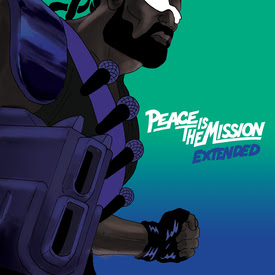 A new extended edition of Major Lazer’s Peace Is The Mission is out today, with four new tracks featuring Ty Dolla $ign, Kali Uchis and more as well as the group’s cover of Frank Ocean’s “Lost” featuring MØ. The new version features the group’s recently released “Light It Up” Remix featuring Nyla and Fuse ODG. The group will return to Kingston, Jamaica for their annual Major Lazer & Friends show with Martin Garrix and many more on December 18.

“Major Lazer is just a group of friends who all came together years ago,” says Diplo of the album. “This album is a learning process for us—trying to make new things, making new friends and going for a bolder sound. The only rule we have is nothing was off limits to make this album. We hope you like it.”

Major Lazer is the dancehall-inspired project comprised of Diplo, Jillionaire and Walshy Fire fronted by fictional Jamaican ex-commando, Major Lazer. Peace Is The Mission follows the group’s previous two LPs, Guns Don’t Kill People…Lazers Do and Free The Universe, both released to widespread critical acclaim. Founded in 2008 by Diplo and U.K. producer Switch, the group has toured worldwide and collaborated with Pharrell Williams, Bruno Mars and Ezra Koenig of Vampire Weekend along with dancehall legends like Busy Signal, Vybz Kartel and Elephant Man.

Diplo was catapulted into stardom following work with M.I.A. on her acclaimed mixtape Piracy Funds Terrorism Vol. 1 and 2007 track “Paper Planes.” Jack Ü, a collaboration with Skrillex, Skrillex and Diplo Present Jack Ü, is out now.

PEACE IS THE MISSION (EXTENDED)