On Monday 9th April M. Ward will release his Bella Union debut ‘A Wasteland Companion’ and we are very pleased to be able to share with you the new video for ‘The First Time I Ran Away’. Directed by Joel Trussell – who also directed M.Ward’s video for Post War cut ‘Chinese Translation’ – this wonderfully animated video translates the lyrics of the song perfectly as it follows a young man embarking on a journey… follow his quest via the link below…

WATCH ‘The First Time I Ran Away’ by M Ward

Ahead of the release of “A Wasteland Companion” M Ward will perform a headline show at the Leicester Square Theatre as well as joining Feist as special guest on her European tour.
Upcoming UK live dates below…

“I can trace all my songs to a specific moment,” M. Ward told a New York Times writer in February of 2009, as he was about to release, Hold Time, his hugely acclaimed fifth album. “Sometimes it’s as insignificant as a friend of yours saying something, a turn of a phrase. Other time it’s like an epiphany moment or just something beautiful that you see.”

Now, with A Wasteland Companion, Ward delivers a dozen new tracks that form a diary of sorts, of the singer and guitarist’s journeys here and abroad since Hold Time was released three years ago. That action-packed period has included tours and full-length discs with Monsters Of Folk (his ongoing collaboration with Conor Oberst, Jim James and Mike Mogis) and She & Him (his celebrated duo excursion with singer Zooey Deschanel) as well as leading his own band.Despite the greater demands on his talents as performer and producer, Ward made sure to build in time away from his hectic touring schedule so he could visit studios along his various routes. He’d call upon whomever was is town to join him – such longtime musician friends as Mogis, Deschanel, Giant Sand’s Howe Gelb and P.J. Harvey producer John Parish or new players with whom he’d been keen on working, like Sonic Youth drummer Steve Shelleyand Doctor Dog bassist TobyLeamen. Ward made states-side stops in Austin, Los Angeles, Tucson, Omaha and New York City. While he was playing in England, he took off to record at the Toy Box in Bristol, where he was joined by Parish to cut the track for “Primitive Girl,” which he later completed at Arc Studio in Omaha with Mogis.

For this self-effacing artist, who has created most of his recorded work in or near his Portland, Oregon home, this was a unique and ambitious undertaking, designed to take him away from his comfort zone. As Ward admits, “Between now and when I made Hold Time there has been a lot of traveling which requires a lot of reckoning with what to leave behind and what to carry – material and otherwise – and thinking about what I want versus what I need, creatively and otherwise. I wanted to get areflection of that on the album. It was a process of stripping away my security blanket, which is the same four walls I always record in. I feel it’s a different kind of album than my previous ones, because it became more of a travelogue. When I listen to it, I hear the places I’ve been. For me, it has more depth, and as far as the guitars go, there are more textures on it.”

Though Ward laid down tracks in so many different locations, with an ever-shifting roster of players, he’s nonetheless managed to create a seamless disc. It feels more like a shared reverie than a literal travelogue, documenting an emotional landscape where the moods shift as dramatically as scenery outside a tour bus window. As with Hold Time, there is a dreamily romantic, yearning quality to some of this work, accentuated by Ward’s gravelly yet gentle voice, esp. on the solo track, “There’s a Key,” recorded at The Magic Shop in lower Manhattan, and the gorgeous, piano-driven “Crawl After You,” cut in Portland with his frequent cohort, the multi-instrumentalist and engineer Mike Coykendall. (Amanda Lawrence also contributes a simple heartbreaker of a violin solo on that one.) But the tone grows darker, more ruminative, at the disc’s mid-point, though it never becomes quite as bleak as the album’s name might suggest. The spare guitar-and-strings arrangement of the title track evokes a stark windswept plain before seguing into the intriguingly claustrophobic, electric-guitar shuffle of “Watch The Show,” which could have been inspired by a half-awake hotel-room viewing of David Cronenberg’s Videodrome. Conversely, “Wild Goose,” which comes late in the set, is all about wide open spaces, boasting a downright angelic arrangement, with orchestra bells, layered vocals and gospel-style hand-claps, Ward likes these abrupt tonal shifts: “There should be some surprises, some sharp turns. That’s what my favorite records, like the Beatles’ white album, have built into them. You’re not really sure what you’re gong to hear next.”

In spirit, A Wasteland Companion has Austin, Texas as its departure point. Opening song “Clean

Slate” is dedicated to Alex Chilton of Big Star, who passed away from heart failure in March 2010, merely days before he was to perform at South By Southwest. Ward and several other artists agreed to step in to make sure the show went on, transforming the evening into a moving tribute to the Memphisrock legend. As Ward recounts, “Alex was supposed to have been there. Everyone agreed that it would be better to have people playing his songs than to have an empty room. It was a very memorable night, a very heavy night. So ‘Clean Slate’ seemed like a good place to start the record.” As if to cap the journey that A Wasteland Companion represents, Ward returns to Austin for SXSW this year, to play his new songs and launch his tour.

On a rollicking cover of Austin-based Daniel Johnston’s “Sweetheart,” Ward pays tribute to another indie rock icon, mashing up country rock twang with girl-group sweetness as he duets with Deschanel. (“I believe Daniel’s entire catalog needs to be listened to,” Ward notes. “It’s just ripe for elaboration.”) He also delivers an exuberant rendition of “I Get Ideas,” an early fifties pop number adapted from a Spanish language hit and made famous by Louis Armstrong. Says Ward, “It’s a song I’ve loved for a really long time. I tried covering it with my band and it’s turned into something we did every night.”

Ward doesn’t have much to say about the evocative album title he chose (though he does acknowledge that he’s inspired by T.S. Elliot’s epic poem of almost the same name). But if words might sometimes elude him in conversation, his songs invariably succeed in speaking volumes – about where he’s been both as an artist and a traveler and about the many fellow artists who have facilitated his journey since old pal Gelb released Ward’s first solo effort, Duet For Guitars #2, in 2000. As he concludes, “Whenever you come back home, photos always seem to fall short of telling the whole story of places you’ve been or people you’ve met. I love the idea that music can tell a truer and maybe more balanced story.” 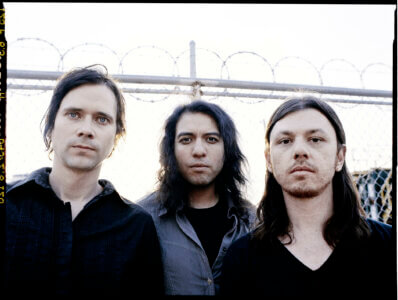