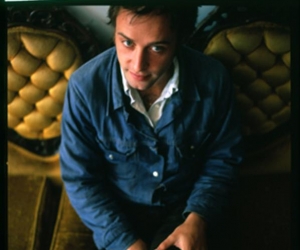 Luke Temple’s new album Good Mood Fool is coming out next week. the album in its entirety and features the provocative single “Katie,” which features spoken word from an adult entertainer and “Florida,” which chronicles a close friend struggling with addiction. Good Mood Fool draws from myriad influences, from the hushed soulful wail of Curtis Mayfield to the dense harmonies of Gil Evans and the Bulgarian Women’s Choir. The album is a joyful thing: living, vivid and, Temple says, “the favorite thing I’ve made so far.”

The new video for “Florida,” directed by Kris Moyes (Grizzly Bear, Kirin J Callinan, Sia), has premiered today and is featured in VEVO’s Indie Wednesday. On the track, the molasses bass line and bongos form the foundation for Temple’s soaring vocal and shimmery, multi-tracked chorus. Temple has also released the following artist statement:

The Unites States is, by far, the largest market for cocaine use in the world with roughly 16% of its population using the drug.

New Zealand is second at roughly 4%

Mexico itself hovers around 2%.

They supply it, we buy it.

Being a musician I have been around my share of the stuff and can say that there is an absolute disconnect from the reality of what is being supported by the purchase of cocaine.
Our privilege and relative comfort can make it hard to look outside of our immediate gratification.

It seems almost impossible to exist without being an indirect aid to the exploitation of those less fortunate but we can at least start with the glaringly obvious.It’s absolutely not worth just being able to party for another few hours.

“Temple will also play a record release show at Le Poisson Rouge in New York City on October 14 on the eve of release of Good Mood Fool (October 15, Secretly Canadian). Following which, he will embark on an East Coast tour with his band which includes Eliot Krimsky (Glass Ghost, Here We Go Magic), Mike Johnson (Dirty Projectors) and Brian Bentancourt (Hospitality). They are, in a word, smokin’.
TOUR DATES