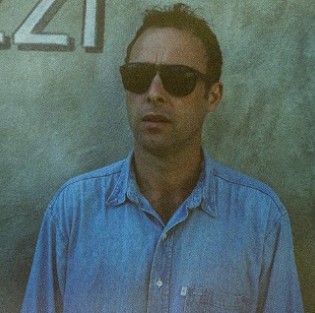 Luke Temple & Eliot Krimsky (Glass Ghost, Here We Go Magic) have released a cover of Curtis Mayfield’s “Suffer.” Born out of a part of Temple’s live solo set, the cover was recorded by Temple & Krimsky in a matter of days. The gentle vocals and swaying bass line give the song’s lament a dreamy feel. Temple says, “It’s nice to remind – and in some cases introduce – an amazing song to people. Curtis makes your heart sing even if it’s a song about regret.”

Temple will also play a record release show at Le Poisson Rouge in New York City on October 14 to celebrate the release of Good Mood Fool on October 15 via Secretly Canadian. Frontman and songwriter for the band Here We Go Magic, Temple has returned to solo work alongside his band identity. For Good Mood Fool, Luke returned to a hyper-limited set of materials: just his voice, a drum machine, a bass guitar, and a Juno-1 synth.

In a sense, Good Mood Fool is an extension of the first self-titled Here We Go Magic record. It was recorded with the same sense of freedom and joy. “Katie” is a prime slice of mid- 80s intelligent pop, almost So-era Peter Gabriel in its rhythms and sound. Meanwhile, “Florida” is a blue-eyed soul hit, a lazy sunny evening of summer beauty. Good Mood Fool draws from myriad influences, from the hushed soulful wail of Curtis Mayfield to the dense harmonies of Gil Evans and the Bulgarian Women’s Choir. Good Mood Fool is a joyful thing, living and vivid and, Temple says, “the favorite thing I’ve made so far.” Shaking off the last vestiges of, as he puts it, “indie-rock haze” it transcends its supposedly lo-fi source materials and gleams like a huge, expensive, fantastically ambitious pop record. It’s something he can rightly be proud of – but of course, there is no resting on laurels to be done, and he hasn’t stopped working.