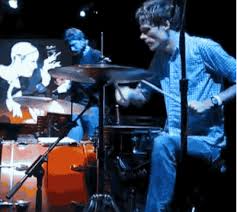 Lucero is an American Punk/Texas Country infused rock band. Now of all the words in that last sentence, if “country” raised a red flag for you, then you know how I felt before I sat down to listen to Lucero’s new album Women & Work. For some people there might be one genre that just doesn’t do it for them, it could be rap, or metal, or techno, but for me it’s country. My dad had two CD’s when I was little: “Country Hits of the 50’s” and “Country Hits of the 60’s”. He used to blast one of them at full volume on Sunday mornings in order to get me up for Church. I will say that I did develop a sense of how the genre changed over those two decades, and did prefer the one that featured Patsy Cline and Hank Williams, but ever since it’s been a real challenge for me to enjoy country music.

Women & Work is Lucero’s 7th album and continues where their last 1372 Overton Park left off, which was built on a fuller sound that featured horns. It’s really more Southern Rock than country, or even punk for that matter. Whatever influences Ben Nichols and company drew from punk or Texas country, they are far behind now, as this album is very confident in its current form. Which means it’s still only going to have niche appeal, but one that can be built upon by touring, which they’ve done copious amounts already and will do plenty more. Nichols hasn’t changed his songwriting formula much over the years, the songs are still about women, drinking, and being on the road, it’s just now those songs can fill bigger rooms with the horns. If you find yourself in one those rooms that Lucero will play in this coming year, you may actually hear the songs off of Women & Work in grittier and more honest context. In the studio there’s something they’re missing with the horn accompaniment that never really lifts the songs off the stable platform Nichols has laid. Nichols vocals are still front and centre, but he’s not really that dynamic of a front man, even if he does write earnest songs. There’s a confidence that he exudes in a way that you believe everything that he sings about, it’s just a matter of if you’re digging what he’s throwing down. In the opener “On My Way Downtown”, he is trying to get a girl to go drinking with him and croons “The last time we drank, I was less than behaved, but I said that I would make up for old days”. That sounds exactly like the guy I don’t want to drink with.

It’s hard to criticize an album for being honest, but I suppose I already have enough songs in my head about women and booze that I don’t need anymore. It’s true that sometimes women and work is what consumes my brain almost 75% of the time, it’s just that my work isn’t traveling across the country with a band, so I have to wonder how many other people that aren’t musicians or want to be musicians can actually relate to it. It seems like ever since I lay in bed cringing as my dad blasted those country CD’s, I’ve been avoiding that type of music, and even though Lucero are only tangentially connected to it, I feel it’s a music and lifestyle that I’m still running away from.