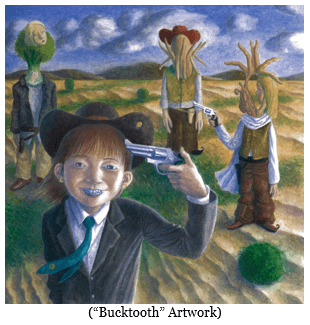 Lowertown have announced their debut album I Love To Lie, will drop on October 21 via Dirty Hit
Share on TwitterShare on PinterestShare on PocketShare on RedditShare on FacebookShare on Email

Lowertown have announced their debut album I Love To Lie, will drop on October 21 via Dirty Hit (Beabadoobee, Pale Waves, Rina Sawayama). With the news, the duo comprised of Olivia Osby and Avsha Weinberg, have shared a video for “Bucktooth,” filmed at a carnival in their home state and directed by Zev Magasis (Gucci, Alex G, Supreme).

“When we were in London recording the album, I was pretty homesick for America so I was listening to a lot of old country and folk music,” said Olivia. “I was really into Johnny Cash’s At Folsom Prison album and wanted to write a cheeky, narrative song similar to ‘Cocaine Blues.’ A bucktooth cowboy with his crew of troublemaker bandits kept popping into my head. The song started as a silly story but ended up being thematically tied with some of the far-right extremism that was happening in America during the time Avsha and I were recording the project.”

Expanding on the video, Avsha said “This song was an homage to our upbringing in the south, and we wanted to feel like the video saw, observed, and understood life where we grew up.”

After meeting in math class, Olivia and Avsha bonded over a mutual love of jazz. Classical pianist Avsha, a first-generation Israeli immigrant, had conservatory aspirations while Olivia spent her formative years writing poetry. They signed with Dirty Hit before graduation and for the pair of highschoolers, the band’s initial success was unprecedented. Their debut album, I Love To Lie, was recorded with Catherine Marks (Foals, St. Vincent, Manchester Orchestra, Wolf Alice and more) in London, it’s a collection of work that highlights the duo’s knack for violently provocative underdog anthems of youthful dissonance and disappointment, the melding of nostalgia and nouveau, and clashing homages to early emo and pop-punk politicism. While they once insisted on non-traditional song structure – forever fearing an inane return from verse to chorus – they’ve since “reeled it in,” favouring coherence over chaos, and almost every Lowertown offering is anchored by a near-naked guitar progression, as emotionally evocative as Olivia’s soul-baring lyrics.

Pre-order I Love To Lie by Lowertown HERE