5 months ago
Words by Mimi Kenny 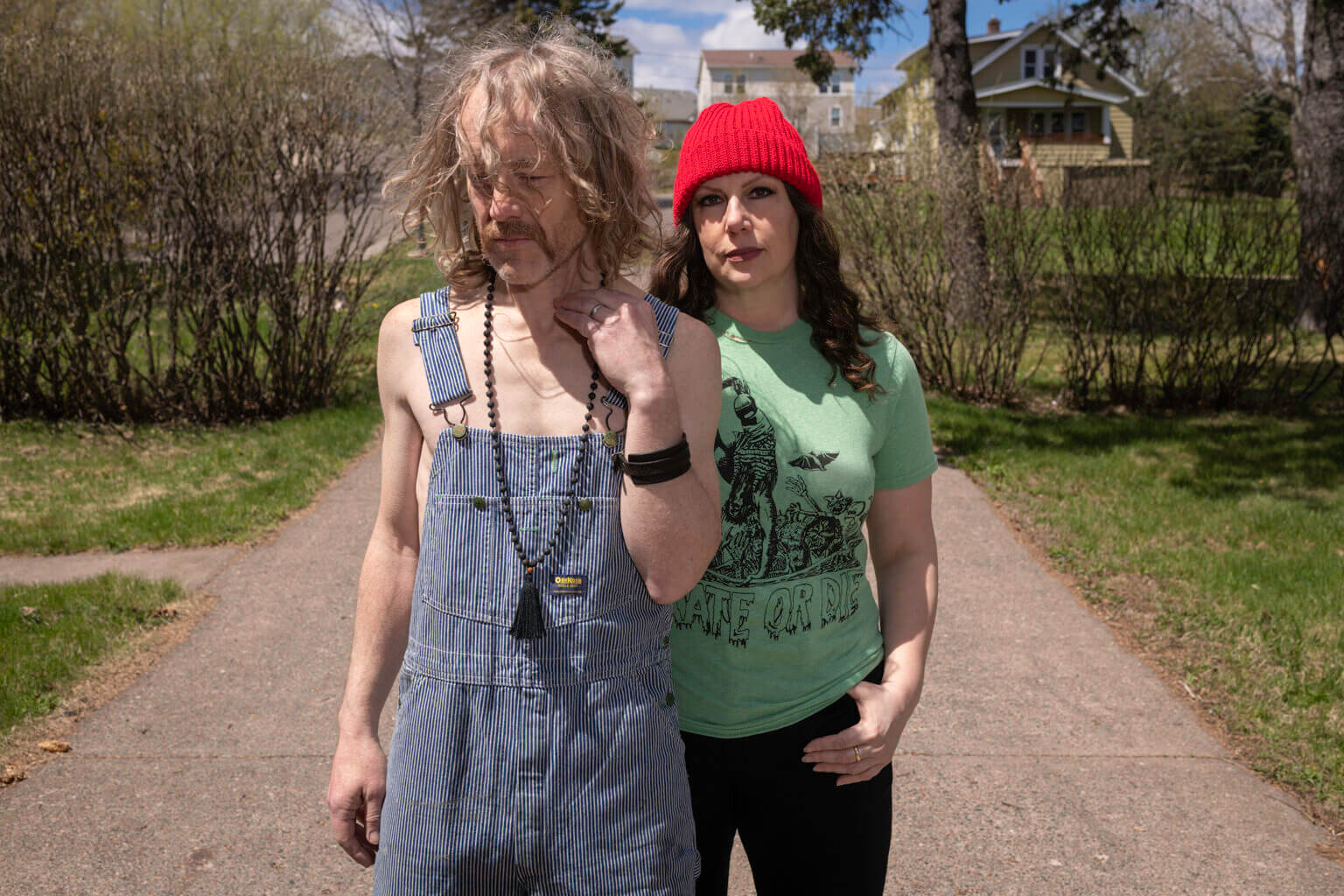 Low makes music less for passively listening to and more for sinking into. For nearly 30 years, bandmates and spouses Alan Sparhawk and Mimi Parker have entranced and enchanted listeners with their layered and cathartic vocal harmonies, mantra-like lyrics, and willingness to push the boundaries of what fans – and themselves – might expect. The Duluth Minnesota band’s 13th album, HEY WHAT, is also their first as a proper duo, but it’s also a natural continuation of the noise-focused textures of 2018’s Double Negative. But listening, and speaking to Sparhawk and Parker, their emphasis on humanity and support is indelible. And like any long-married couple, they finish each other’s sentences. I spoke to Low about their new album and their thoughts on matters outside of music.

Northern Transmissions:  What sets this album apart from other Low albums?

Alan Sparhawk: Really, with each record over the years, we’re always trying to do something new. We’re trying to challenge ourselves, and hopefully come up with something that’s a surprise, beyond our expectations. I guess there’s been different times where that’s kind of stuck out. It’s been a little more obvious, and sometimes, it’s a little more subtle. This one for sure is coming out the same way we worked with Double Negative, kind of similar approach to taking a song and going in and kind of just opening it up and saying, “Okay, what else can we do with this song? What new textures can we find that will still then make this song?” I don’t know if this record-

AS: The vocals really kind of became a focus in the beginning. Early on, we realized vocals were working a certain way.

AS: Further into what we’ve-

MP: With what we’ve been doing, yeah.

AS: The pandemic, for sure, sort of a threw in the wrench in the chain in “How do we do this? How do we record?” It actually worked out pretty good, because the way that we were working with Double Negative, very fragmented. Sometimes, only a day or two, short sessions. And then, we go for a month or two and think about it, twist things around a little bit, see if we can come back again and hit it again. It wasn’t easy. There was a lot of testing and a lot of times when we’d have to quarantine and stuff like that.

NT: Did you find that you were individually coming up with ideas for songs and putting them together, or were you working on songs more collaboratively?

AS: We’ll write ‘em. Either I’ll write a song or Mimi’ll write a song. There’s a couple songs where we worked together. We don’t work together as much as you’d think, initially. Once a person kind of has an idea or, “Well, here’s some chords, and here’s this song,” then, we get together and kind of work on it, play off each other, and add and subtract. We were at least at that stage by the time we went into the studio. And BJ’s helpful with textures.

NT: Did the songs change greatly from the Instagram performances?

AS: Yeah, every time we’d go to the studio to start a song, it was always like a clean slate. “Let’s find a sound that’s interesting,” or “Let’s find a texture,” or “Okay, this song has about this rhythm, goes about like this.” And then, once we have that. maybe we’ll put some chords or something harmonic on there to give it reference. Actually, we would put vocals on really early on in the process. Because, once you have the vocals on, it’s a lot easier to say, “Oh, this is what the song’s doing.”

AS: I remember being a lot more precious about like, “No, this is how the song goes!” We’d kind of create this image, like “This is the only way that this song can be.” Because we’ve been able to work with some pretty creative people over the years, it really has kind of broken that up. And now, we’re definitely like, “Okay, here’s an idea. Let’s go find what that unknown version is.”

MP: We’re kind of constantly surprised in the studio with what we come up with, what [producer] BJ [Burton] adds to it. And that’s pretty exciting,

NT: Have you been taking inspiration from other noise artists, or are you trying to forge your own path?

AS: There’s definitely other artists. You run into stuff all the time, and a lot of it’s obscure. Sometimes, you’ll be listening to this show on this independent radio station, and you’ll just kind of hear textures. Same with noise stuff, Sunn O))), I really liked the last few Scott Walker records. Towards the end of his life, his few records he made, I think he was like, “Okay, what new territories or what new possibilities with sort of this post-rock, post-modern, whatever music,” There’s for sure inspiration. There wasn’t anything specific we were looking at. For sure, we’re trying to make something original. A lot of what makes those extreme artists actually interesting is that they’re original.

NT: Has your shift in sound resulted in a shift in audience at all?

MP: I think [older fans are] still coming, for the most part. We love our fans, but eventually, they’re gonna get old and decrepit like us and not going to shows [laughs].

AS: Every aging artist hopes they can still be valid, of course. It’s good, and we hope that people come in. We’re always challenging ourselves. We’re always trying to push forward and surprise ourselves. If it ends up making interesting music. then good. And hopefully, it’ll attract people that love good music.

NT: You’re also very active on social media. How did that start?

AS: I’m pretty slow with technology. I remember when I finally got email. Same thing with MySpace. I think I arrived just as it was dying. And Twitter had been around for a while. We’re lucky that most of the people that respond to us are positive. We don’t get too many trolls, and people throwing negativity around. I think the key to it is that you have to write it down. There’s those couple seconds when you type, and you’re like, “Okay, settle down. Remember that everyone’s gonna see this. You might have to answer, and there’s gonna be people who misunderstand this…” I’m pretty good if I’ve got a few minutes to edit myself [laughs[. I come with something to say, and I can usually be pretty kind and patient and I can turn the other cheek pretty well.

NT: I was really struck by the album cover because I feel it’s one of those cases wherethe music sounds like how the cover looks like. Where did it come from?

AS: A friend of ours from London, Peter Liversidge, did that. He’s done the artwork for the last couple records we’ve done. We sent him a couple songs as we were mixing, and he wrote back to us with this idea he had. He wanted to zoom in on some printing, some antique printing papers that he had. Right before they figured out how to transfer photos to newspapers, the pictures were drawn. You can’t just do shading; the shading had to be done with lines. What the cover is is a zoom-in on a picture someone had made of the sky over a harbor with a boat coming in, or something. So, it’s just a real simple detail from this thing. It’s these really regular lines, but then every line is almost organically flawed.

NT: I also want to ask about the title, specifically the fact that it’s rendered in all-caps

AS: (Laughs) I like all-caps. Lowercase, there’s a movement to the upper and the lowercase that.I think complicates things for me. At least in my dyslexic mind, it slows the process for me. There’s a song called “Hey” on the record, and there’s a moment in there where it sounds like Mimi is saying “Hey, hey, hey, what.” I remember hearing that and going, “Oh, ‘hey what,’ that’s an interesting phrase.’ So, it’s meant as an answer, not a question. Someone says, “Hey what.” Well, hey what. It’s the act of saying, “Here’s why I tapped you on the shoulder.

NT: How did you decide to use drums in the amount that you did for this album?

MP: It’s pretty minimal drumming in it. We decided to kind of experiment with different forms of rhythm or different techniques. So, there are only a couple of moments when there’s an actual drum being hit. It’s mostly on the last song. It’s really refreshing to not, ‘cause there’s so much pressure. The early recordings, we’d track it: the bass and the drums specifically, and it’s kind of a lot of pressure.

NT: With songs like “Days Like This,” is the album meant to be a commentary on what all is happening in the world?

AS: I don’t ever assume that we’re dictating to anybody what’s going on [laughs]. I think we had that song together before the pandemic hit. It might’ve been as things were happening. For sure, there’s definitely a “last days of Trump” kind of vibe and last days of what’s going on. But then, as the pandemic hit, that song just had so much weight. I know people attribute it to this, and I can’t say that it’s not.

MP: And if definitely is a reaction. Whether it’s a conscious or a subconscious reaction, it’s definitely a reaction to what is going on. But honestly, every generation would say the same thing, that the days that they’re living in are the most tumultuous and chaotic. I don’t know, we might actually have ‘em beat this time [laughs].

NT: How have things been going for you in your personal lives?

AS: Doing our best. We’ve had some tactile things to deal with, people being sick. My mom passed away in February. We knew it was coming, but definitely, COVID made it kind of sadder and more complicated.

MP: It’s weird, not doing shows in a long time.

AS: Just on an anthropological and psychological level, we’re a social society. Church is one thing, but concerts, going out, being close to people, kind of at least in your mind having this same feeling, “All right, we’re all on the same wavelength. We’re listening to the same music. We’re into this.” People need that.

NT: You’ve had this band together for 28 years, you’re married, and you’ve known each other since you were nine. Individually, what do you mean to each other?

AS: I really feel lucky to have lived a life, kind of knowing what it’s like to really be one with someone else. Be it the fact that we’ve known each other for so long, and also, just working very hard through things to still be together.

MP: We’ve had a common goal the whole time. First, it was to work together. We thought that would be really great, and we found something that worked together. But honestly, I feel we’ve played off of each other with our certain talents, proclivities, and personalities, and it’s worked out. Our hope is that this music we’ve created together has been impactful on others and that it has been a positive force. It’s a human endeavor, and we hope to have helped other humans, along with ourselves, in this experience.

Pre-order HEY WHAT by Low HERE