A couple of years ago, three friends started writing and recording music together above a hairdresser on a busy street in Newtown, Australia. They’d known each other casually for awhile and had all been in other bands previously, but hadn’t found their own individual voices or the proper outlet for the songs percolating in their heads. At first, they’d fumble around with their recording equipment, pick up whatever guitars were lying around and record. But before too long, they realized they’d hit upon the magic that had eluded them up to that point.

Those three friends – Tommy O’Dell, Johnny Took and Matt Mason – eventually christened themselves DMA’S. Before playing a single show, off the back of a few demos, DMA’S were signed by Australian tastemaker label, I OH YOU and started playing their nascent collaborations live for Australian audiences. Beyond the music, their unique sense of fashion quickly inspired Antipodean youth culture. Grabbing attention for their single “Delete” and its debut U.S. and U.K. gigs in the fall of 2014, the band released its first self-titled EP on May 19th through Mom + Pop Music.

DMA’S have been touring North America all summer. Playing shows, pretty much everywhere, including appearances at Governor’s Ball, Bonnaroo, Osheaga and last week at Lollapalooza in Chicago. This weekend, the band will head to San Francisco to play Outside Lands, on the way stoping in LA, for a show at Santa Monica Pier on Thursday (8/6) . 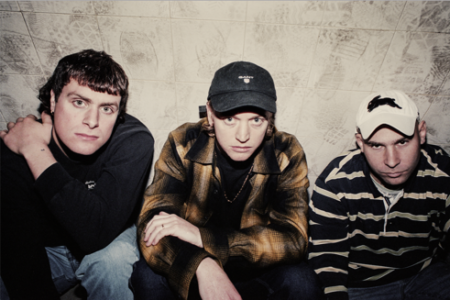