Brooklyn’s Monogold have shared a new tune called ‘Lovebug’.The song is included on an upcoming EP for entitled ‘Yolk’. ‘Yolk’ is out on December 9th via Chill Mega Chill Records.

With their new EP in hand titled, Yolk (Chill Mega Chill Records), Kelly, Apuzzo, and Falotico are giving the world a small taste of what is to come in the future of the band. The four song EP is a prelude to another full-length record which is in the process of being mixed right now. As with their new found musical simplicity, the lyrical content will tackle the simple things: breastfeeding, giving birth, being born, sex, bugs, and more.

In an interview with The Village Voice before the release of their last album, Monogold told the Internet “We’re a f**king rock band.” Since the release of 2015’s Good Heavens, which was Monogold’s acoustic-based effort, they have torn down any preconceived notions that they or anyone else had of them. After completely stripping down their sound for Good Heavens, the Monogold boys took this new foundation of simplicity and started building with their signature, catchy power-trio melodies and hooks. They still like to go deep on the lush soundscapes, but their songs have become a bit more focused and driven by the instrumentation and the vocals. 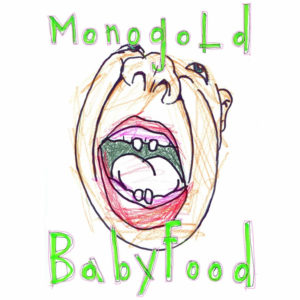