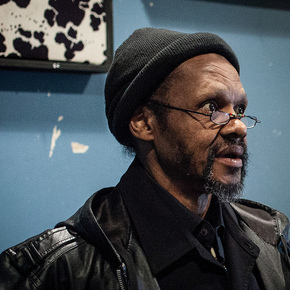 Lonnie Bradley Holley was born on February 10, 1950 in Birmingham, Alabama, the seventh of twenty-seven children. From the age of 5, Holley worked various jobs: picking up trash at a drive-in movie theatre, washing dishes, and cooking. He lived in a whiskey house, on the state fairgrounds, and in several foster homes. His early life was chaotic and Holley was never afforded the pleasure of a real childhood.

Since 1979, Holley has devoted his life to the practice of improvisational creativity. His art and music, born out of struggle, hardship, but perhaps more importantly, out of furious curiosity and biological necessity, has manifested itself in drawing, painting, sculpture, photography, performance, and sound.

Holley’s sculptures are constructed from found materials in the oldest tradition of African American sculpture. Objects, already imbued with cultural and artistic metaphor, are combined into narrative sculptures that commemorate places, people, and events.

Holley did not start making and performing music in a studio nor does his creative process mirror that of the typical musician. His music and lyrics are improvised on the spot and morph and evolve with every event, concert, and recording. In Holley’s original art environment, he would construct and deconstruct his visual works, re-purposing their elements for new pieces. This often led to the transfer of individual narratives into the new work creating a cumulative composite image that has depth and purpose beyond its original singular meaning. The layers of sound in Holley’s music, likewise, are the result of decades of evolving experimentation.

In November of 2006, Lonnie Holley joined a recording project in Gee’s Bend, Alabama. Matt Arnett rented an old church, hired an engineer, and set up a recording studio inside Friendship Baptist Church. During the day Matt, Amos Harvey, and Brando Marius (the engineer) worked to record the rapidly disappearing acappella hymns and spirituals found in this tiny Alabama hamlet. As the recording day would come to a close, an evening recording session with Lonnie Holley would begin. These were the first songs Holley would ever record using state of the art equipment. Prior to this session, the only recordings of Holley’s music were homemade recordings. Working late into the night (over the course of almost a week), Holley recorded three complete tracks and parts of at least two others (which he has yet to return to).

During the recordings in Gee’s Bend, Holley played a variety of instruments, from keyboard and synthesizer to the pastor’s chair. It was a great time of experimentation for Holley and set the groundwork for the recordings that would come years later, many of which can be found on Just Before Music, Holley’s debut record with Dust-to-Digital, as well as his follow-up Keeping a Record of It.

6. From the Other Side of the Pulpit (featuring Bradford Cox and Cole Alexander)

7. Keeping a Record of It (featuring Bradford Cox and Cole Alexander