Today, Blondie has premiered the video for latest single “Long Time,” off of the band’s 11th studio album Pollinator, out May 5th (BMG). “Long Time” is the third track from the remarkable new album that perfectly demonstrates the blend of Blondie’s pioneering past with new influences from modern music’s great innovators – the track is a collaboration between Debbie Harry and Dev Hynes (AKA Blood Orange).

Set in the city where Blondie’s story began over four decades ago, the video for “Long Time” sees the band in a chaotic, fast-paced New York City. Scenes flip between front woman Debbie Harry recklessly driving in a yellow cab and the band playing on the city streets. The video was shot and directed by Dikayl Rimmasch, who also worked with Beyonce on her Lemonade album videos and on her Formation World Tour. Rimmasch also directed the video for Pollinator’s debut single “Fun.”

750 7″ copies of “Long Time” will be released as a Record Store Day exclusive in the US – the 7″ includes the single and a non-LP cut of “The Breaks,” a brand new track written by Chris Stein and Debbie Harry in the album sessions at New York’s famed recording studio The Magic Shop. For a full list of participating stores go to www.recordstoreday.com.

The band has also announced their first ever pop-up shop at Camden Market in London from April 29th until May 3rd. The shop will host an exclusive photography exhibition by Chris Stein. Similar to Stein’s exhibition Chris Stein: Negative at Somerset House in 2014, the exhibit will showcase a series of iconic photographs, providing a behind the scenes look on life in the trailblazing band.

Blondie’s sound and sensibility is as fresh on Pollinator as when they first topped the charts. The band has enlisted an eclectic group of songwriters for their most collaborative album to date. Those offering their own interpretation of the band’s legacy include superstar Sia, British singer Charli XCX, Dave Sitek (TV On The Radio), Nick Valensi (The Strokes), Johnny Marr (The Smiths) and Canadian movie blogger and indie rocker Adam Johnston (an Unkindness). The LP, produced by John Congleton (Franz Ferdinand, St. Vincent, Sigur Ros) and recorded at NYC’s famed studio The Magic Shop, also features vocals from Joan Jett, cross dressing comedian and singer John Roberts and The Gregory Brothers (founders of Songify the News). Laurie Anderson appears on a special hidden track on the CD version.

Blondie will bring their one-of-a-kind live magic to the stage when they kick off their North American co-headlining Rage and Rapture Tour with Garbage on July 5th, tickets on sale now. The band has also announced a return to the iconic Roundhouse in London on May 3rd to celebrate the release two days later of their remarkable new album. 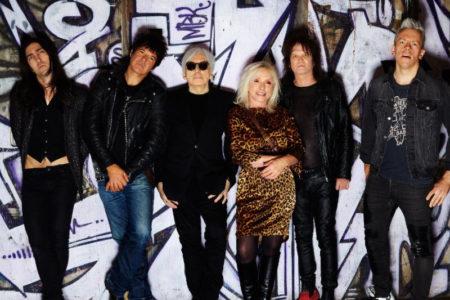 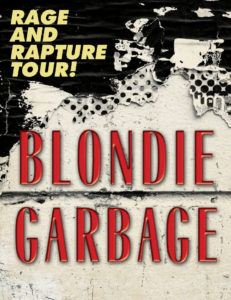