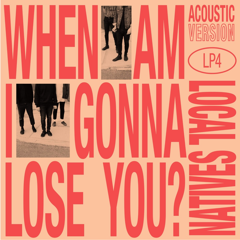 Local Natives "When Am I Gonna Lose You?'
Share on TwitterShare on PinterestShare on PocketShare on RedditShare on FacebookShare on Email

Local Natives have released an acoustic version of “When Am I Gonna Lose You.” The track is off of their current release, Violet Street. The new rendition amplifies the song’s profound longing and lush harmonies along with the intimate accompanying video, directed by Jon Chu. Taylor Rice says, “When Am I Gonna Lose Yo’ began its life as a sad, stripped down song full of regret over losing something that felt too good to be true. Over the months of completing it, the song became triumphant and hopeful, but we wanted to record a version that captured the ache it had been born with.”

The acoustic When Am I Gonna Lose You follows remixes of the single by underground beat maker, Joey Pecoraro, and acclaimed electronic artist, Medasin. Dancing Astronaut praises the latter, “Medasin masterfully remakes the upbeat indie track into an infectious slow jam reminiscent of sleepy, summer nights.”

Local Natives are currently on tour in North America. Their spring run will wrap this Saturday at hometown show at the Hollywood Palladium in Los Angeles. The performance follows back-to-back Brooklyn Steel shows in NYC. The band has announced additional North American tour dates taking place in the fall.