5 days ago
Words by Dom DeCree 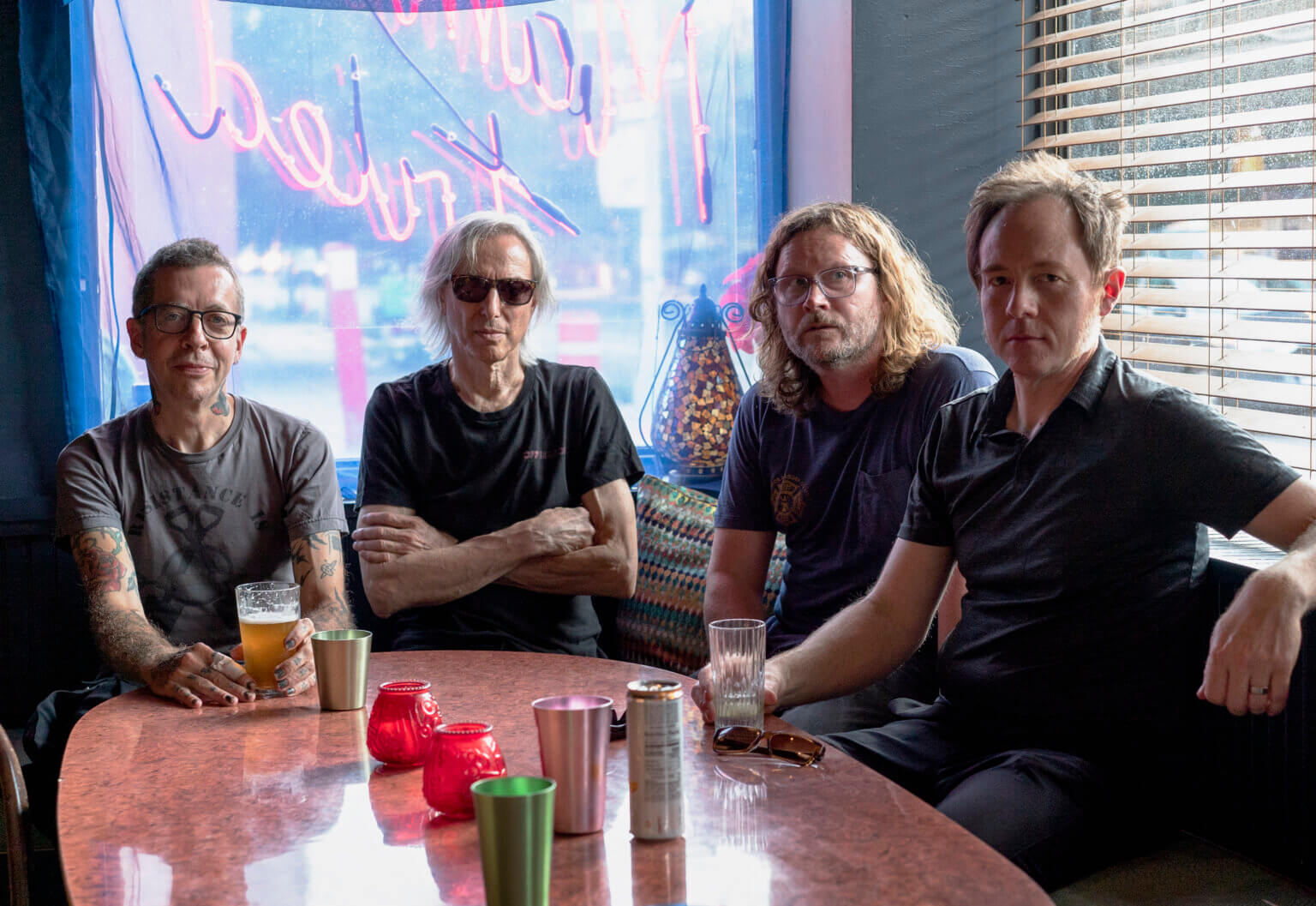 Live Skull are finally back, and will hit Lincoln, Nebraska, Detroit, Baltimore, Minneapolis, Cincinnati and more on their upcoming tour. The band are amped to get back on the road, with the return of Rich Hutchins on drums, along with Kent Heine and Dave Hollinghurst. Dom DeCree caught up with vocalist/guitarist Mark C to talk about the tour, and the ups and downs of his hometown, and his effort of trying to bring back it’s positive energy.

Northern Transmissions: Live Skull’s recordings from the 1980s feel like snapshots of Lower Manhattan in that decade. The danger, the filth, the freedom. Here we are, decades later, and Live Skull is back. You are still based in Lower Manhattan yet the city has changed. What can you say about that change and about how NYC inspires, or doesn’t inspire, Live Skull in 2022?

Mark C: I’m still in Noho, a few blocks from where CBGBs was located. But that’s’ a complicated question. The abandonment of the city during the height of the Pandemic, both by the rich, and then by the Police -in response to the Black Lives Matter Protests- had left the city feeling much like it did back in the day! Fires burned in the trash cans at. All the store front windows in Soho and Noho were either smashed or boarded up and covered with posters Only this time they were adverts for internet startups not No Wave bands. The intro to In a Perfect World, the lead track on our 2020 release Dangerous Visions, is a recording of sirens recorded late one night during the protests, sounding eerily familiar to the city circa 1980, when I arrived downtown. And though the people have returned, the Police are still nowhere to be seen. Want to do a couple of laps around the fountain in Washington Square Park on your unlicensed motorcycle, while smoking crack and hopefully avoiding baby strollers, no problem! I mean it still feels like a much safer place in general than the 80’s and unfortunately the underground downtown clubs have disappeared, but there are big cracks in the polished veneer. But the sheer scale and epic energy of the city is always an inspiration to make bold statements with your art.

NT; You’ve been quoted saying, “Since re-forming the band a few years back, I have been protesting the same decadent forces that continue to haunt our politics and culture.” What are some of these forces, more specifically?

MC: Right, it was not only the ruined landscape and lawlessness of the East Village -where we all lived- that inspired early Live Skull; don’t forget, Reagan was President and was about to be re-elected! Fittingly, the reanimation of Live Skull in 2016 coincided with the election of the now disgraced and twice impeached former president, and the war against Democracy by one of our two political parties! That makes the monster in Live Skull very agitated!! Even in the darkest hours of anti-Viet Nam protesting back in the late 60’s, I don’t think many on the left were expecting a move toward the end of Democracy, the end of free and fair elections, new restrictions on voting rights -I mean back then it was just a few years after the passage of the Civil Rights Amendment. And now the overturning of Roe vs Wade, restricting the rights of the LBGT community, the banning of books and whitewashing of slavery!

The 80’s were bleak enough with the abandonment of NYC by the Federal government, and the catastrophic changes brought on by the Reagan administration that crushed unions, enriched the rich and brought back big money into Politics. Now we are living through the effects of those policies, and it’s not pretty! But I think the re-distribution of wealth upwards has had the most dramatic effect on the city and the surrounding area. It’s heartbreaking to watch talented, hard-working friends and family members move out of the area because there is no place left in the city that is affordable! And the people that remain are spread out far, and wide. It’s hard to have a sense of community like back in the day, when we all lived in Manhattan below 14 th street and practiced and performed, made art, ate, drank and partied in the same neighborhood! We’re amping up the jams to keep that spirit alive, to encourage people to resist and stand up for what they believe.

NT:  Tell us about Live Skull’s motto: “Harnessing chaos for their own beliefs!”

MC: Live Skull came about suddenly almost by accident. Marnie, Tom, and I had been jamming in my loft one summer in an effort to learn our instruments, occasionally joined by our good friend Julie Hair, when we decided to accept a gig, that was initially offered to Tom and my first, NYC band, called Body. On my way to rehearsal, I tried to tear down a Black Skull poster I liked but ended up with only a fragment containing the words: “Skull” and “Live at…” There it was sitting on my counter; one of us said, lets call the band Live Skull and it was done in an instant. We had a few jams and a very high-profile gig offer, playing a party for the comic artist S. Clay Wilson, at an uptown club called Majique. (later transformed into the male go-go bar, Chippendales). We were picked up in a Limo but ended up being thrown out on the street with all our gear after being cut-off mid-set, provoking Julie to toss a cinder block into the audience.

Our neighborhood was lawless (the freedom of information act has shown there was a no go directive for the Police at the time), each day’s adventures, were unpredictable. We were high on the noise of No Wave and the cacophony of the Glen Branca’s early guitar band. Listening to punk and post-punk at full volume all day and wild club music at night. Djing at illegal after -hours clubs till 7AM…We hung with a crowd that was knifed, hit with golf clubs, dodged aids infected needles, lived in abandoned buildings without heat or hot water, or in some cases any water. But as a band we remained optimistic. And when we had to come up with a quote for the press release of our first self-titled, self-released ep, those words miraculously materialized on the page in front of us!

NT: Gary Panter, known to some people as the set designer on Pee Wee’s Playhouse, made your new tour poster as well as the cover art for the two albums you’ve released since 2019. Is that a friendship that goes back to the ‘80s?

MC: A mutual appreciation goes way back, but we actually met in person a few years ago when his band Fog Window came to record at Deepsea, my studio in Hoboken, NJ (and Live Skull’s home base.) I went to Gary’s Gallery show at Fredericks & Freiser in Chelsea and was knocked out by his current paintings. He and the gallery were gracious enough to share the artwork. Coincidentally, a friend of his and fellow graphic artist Charles Burns actually created an image for our Positraction tour tee shirt back in 1989; and it turns out that Gary’s image of Rev Jim Jones, which we used on the Tour poster, was made while Gary was working with Charles! Gary’s one of the most serious artist/musician’s that I know as well as a great friend.

NT: Tell us about the current Live Skull lineup that you’re taking on the road.

MC: The ferociously tattooed and hardest hitting drummer in NYC, Rich Hutchins doesn’t need much of an introduction. He was the second and most recent Live Skull drummer joining midway through the recording of Dusted, our third LP circa 1985. He’s taken his shirt off while performing with several bands in the meantime including Shilpa Ray, and currently drums with Art Gray Noizze Quintet, Vestments, Isolation Society and others!

A few years back, monster bassist Kent Heine (formerly of Nebraska’s the Holy Ghost) joined my experimental electronic band o13 (@o13world) and played on our first LP, Time Wave Zero before digging in heavily on Live Skull tracks for Saturday Night Massacre (2019) and Dangerous Visions (2020). His infectious and funky bass lines anchor the grooves while doubling down on Live Skull’s storied low-end growl. Guitarist and singer, Dave Hollinghurst, referred to by some as our secret weapon, joined the reanimated Live Skull for an EU tour just before recording Dangerous Visions. His evocative riffs and neo-psychedelic guitar sounds have been central to the reimagined two-guitar attack that ties this band to the original, while blasting it into another dimension! He’s played with Small (23), Frozen Falls, Nicole Atkins & The Sea, Steve Shiffman and the Land of No and more!

NT: Tell us a story from the time Live Skull toured with Jane’s Addiction.

MC: The shows were way cool, Jane’s Addiction was in their absolute prime! All sold out -medium to large size -venues; I remember one night, after a harrowing drive, speeding across ice packed highways, we arrived just in time for our opening set at First Avenue, in Minneapolis. The place was overly packed, and the club roadies had to carry our gear – Marshal amps and all- over their heads, cutting a trail thru the anxious crowd so that we could squeeze past, and up onto the stage to immediately start our set! A total rush. It might have been at that gig where their guitarist -was it Dave Navarro at the time? – proposed marriage to our bassist Sonda Andersson (she turned him down). Not that anyone would remember, the amount of drug taking among various members of both bands had reached critical mass! Our final show with them was at The John Anson Ford Amphitheater in Los Angeles, on a gorgeous evening. It was the largest venue we had played. We spent hours on our soundcheck which included a detailed separate stage monitor mix, which was absolutely critical to hearing ourselves on that big open stage. By the time we started our set, the stage mix sound engineer had disappeared-probably partying with the band- and we ended up roughing it with very little ability to hear each other!

NT: What bands are you currently listening to?