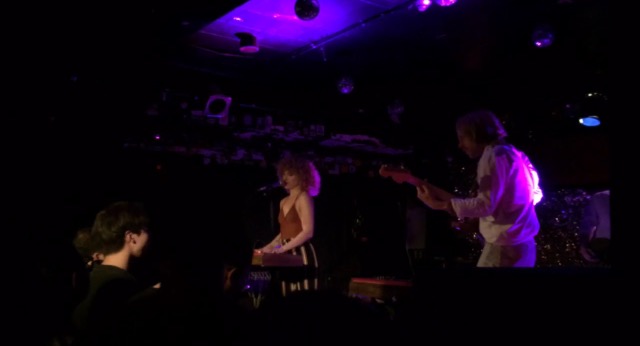 About 11:15 pm this past Saturday night, married pop duo Alaina Moore and Patrick Riley took the stage as Tennis to a packed-out house at Toronto’s legendary Horseshoe Tavern to perform a swift but impactful batch of songs.

Tennis have just dropped their fourth album, have said that the last few years have been somewhat of a cross roads for the band. Jumping off the road their previous two albums had lead them (which saw the band become more polished and produced), their latest record ‘Yours Conditionally’ has more in common with their debut ‘Cape Dory’, and was similarly written another yacht trip intended to rekindle the pairs songwriting flow and as a chance to take stock. The tracks that blossomed from these times integrate perfectly within their live set, and Tennis snapped and punched their way through the evening.

Things kicked off about just over an hour earlier, with Overcoats delivering the perfect apéritif. With a swift change over between acts, Tennis entertained throughout a tight 14 track set mixed with songs from across their discography but only including a single track from their debut ‘Cape Dory’, the concept album that helped launch the group back in 2011. “Marathon” along with other early hits such as “Origins” were notable highlights on what was an evening filled with laid back pop delivered expertly, focused on the wispy-sweet voice of Moore, and the sonically varied guitar playing of Riley.

Recently, the worlds current climate has led Moore to write lyrics that are not only personal but also more socially fuelled and reflective. The band seem to have a new lease on life after their latest LP, and this is evident within their live shows where they seem confident, and comfortable. The camaraderie between the duo is almost tangible, and as a live unit Tennis create lush shimmering pop music that when combined with lyrical matter which is heavy on substance such as newies “Ladies Don’t Play Guitar” and “In The Morning I’ll Be Better” makes the group an undeniably impressive sight.

“Your’s Conditionally” is out now via MUTUALLY DETRIMENTAL.