Live Review – Junip + On And On 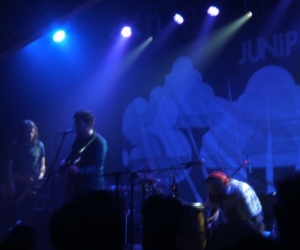 Wednesday night at the Rio Theatre drew a sold-out crowd for Swedish-based folk-influenced electronic band Junip. The group, perhaps best known for the solo endeavours of their lead singer José González, is currently riding a wave of excitement on the heels of the release of their introspective self-titled sophomore album.

Barbarossa – aka London-based, Junip bandmate James Mathé – got the night started with a solo set, showcasing a set of soaring vocal melodies ahead of an array of keys and electronic samples. Standout tracks included “Turbine” (which brought out Nate Eiesland of On An On to guest on guitar) and set-closer “The Load; the latter, a pop standout with epic overtones.

Minneapolis/Chicago-based band On An On took the stage next, enveloped under a projected wave of stunning visuals. Kicking off the set was the slow-burner “All The Horses” off of their excellent debut album, “Give In”. Building off the breathy hum of Eiesland’s lead, the tune grew from an echoey sonic backdrop to a montage of distorted synth-infused thunder.

With “War Is Gone” and “American Dream” following along, the set order audibly served as the perfect volley for the irresistible vocoder-soaked “The Hunter”; this song drawing the band’s first round of knowing “woo’s” from fans scattered throughout the audience.

Set closers included fan favorite “Ghosts” and current single “Every Song”. While soft on the banter, the break between these two songs brought out Eiesland’s longest line of the night: “Vancouver’s been really good to us… I feel like we’ve had a real connection here”. Judging by the crowd’s decibel elevation following each song, he’d no doubt be correct in that assertion.

The night, however, belonged to Junip. The audience, in their seats or sitting in the aisles to this point, mostly discarded their very-Vancouver inhibitions to stand up and fill out the front of the room. Taking the stage as a live-sextet, Junip opened with the hypnotic “In Every Direction,” from their 2010 debut full-length album, “Fields”. The song would set the tone their onslaught of toke-friendly synth folk.

Continuing on with pulsating drones, the biggest break in style came midway through the set with the Hot Chip-flavored “Your Life Your Call.” The show stealer would come towards the end though with the majestic “Line of Fire” off of their latest release. The song flexed its muscles as an exercise in masterful grand pop crescendo; it was a fitting takeaway from this night full of memorable moments.