Review: Death From Above 1979 and METZ 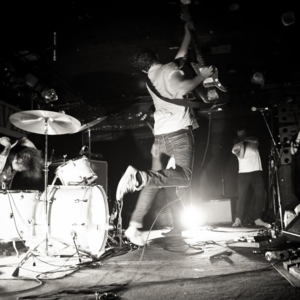 Saturday night was one of the few nights of the year where adrenaline and raw pleasure decided to pay boring old Ottawa a visit. Sold-out for weeks, Death From Above 1979 led a stacked bill featuring openers PS I Love You and METZ at the Bronson Centre. A bizarre venue for an eardrum-melting rock concert, the bands took to the stage in what looked like an old high school auditorium, and it’s a miracle the venue withstood the little-earthquakes created by the most hyped-up and fun audience I’ve seen in this city.

Kingston duo PS I Love You kicked off the night with a short set of shoegazy fuzz. Vocalist Paul Saulnier is a painfully shy performer with very little audience interaction, but his guitar talent is unquestionable in providing soaring feedback-infused solos. Many of the songs blended seamlessly into each other, but built up to a standout finale with Saulnier soloing behind his head.

Next up was the always exciting METZ. Though they now call Toronto home, frontman and guitarist Alex Edkins was born and raised in Ottawa, and played an inspiring show to his many friends and family in the crowd. METZ absolutely thrives off their live performances, and since their 2012 debut, they’ve become heavier and tighter on stage and are a band not to be missed. Whereas PS I Love You did not feel much love back from the crowd, METZ woke everyone up with mosh-inducing distorted noise-rock. With DFA1979’s Jesse Keeler watching from the side, METZ blew the audience away with road-perfected standouts “Wet Blanket” and “Wasted”, as well as some new songs from their upcoming sophomore Sup Pop release. You have to think it won’t be long before METZ sells-out their own headlining shows of this size.

Finally came the moment many thought would never happen: dance-rockers Death From Above 1979 reunited and playing brand new material. DFA1979 got the party started with a thunderous “Turn It Out”, leading to instant moshing and everyone losing their shit. The crowd was dedicated and in for the long haul; it was hard to find anyone not dancing for all 18 songs straight. Sebastien Grainger’s stamina may rival that of some Olympic athletes; it’s insane watching him master his drum kit while delivering shrieking vocals without ever running out of breath. “Cheap Talk” off of last year’s long awaited The Physical World stood out as one of night’s highlights. The only complaint about the show is that many of their songs sound the same live. Death From Above 1979 has a proven formula for success and they feel at ease sticking to the game plan, but some diversity in their live performance would be welcome. For two guys who claim to have once hated each other, their musical chemistry runs deep and it’s a pleasure to watch them play off the other’s cues. Between “White Is Red” and a fantastic “Trainwreck 1979”, Grainger told a story about the first time the band played Ottawa, which involved a drunken bike ride, exploding racoon guts, and puking on his friend’s face… must have been a fun night. During the encore, the Toronto duo had even those sitting in auditorium chairs up and dancing with a raucous “Romantic Rights”, before ending the night with “The Physical World”. Despite suffering from hearing loss, everyone left with giddy smiles, and the concert was truly the best way to end the first month of the new year.